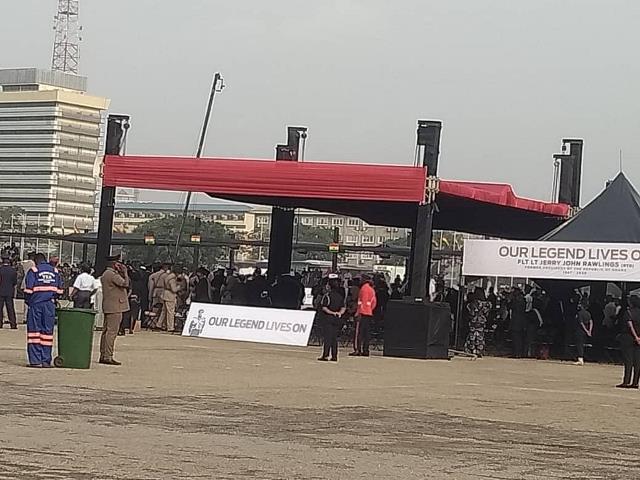 The military burial service of the late former President Jerry John Rawlings is underway at the Black Star Square in Accra.

This is to climax a four-day of elaborate state funeral, which saw people from all walks of life paying their last respect to the former president, who ruled the nation for 19 years.

The Ghana Armed Forces (GAF) has taken full charge of the burial service, smartly dressed in their ceremonial outfits and marching briskly to honour the memory of the former Commander-in-Chief of the GAF.

Personnel of the GAF were seen riding on beautifully dressed horses marching majestically towards the ceremonial grounds.

Former President Rawlings is touted as the “People’s Man” for his charisma and values of probity, accountability and social justice that enamoured him to many.

There is a 296-page tribute brochure that contained tributes from the Family, government, National Democratic Congress, ECOWAS, the Anlo State, world leaders, organised groups, friends and loved ones, all eulogising former President Rawlings.

The COVID-19 safety protocols are strictly being observed at the ceremonial grounds here.

The mortal remains of the former President Rawlings would be interred at the new Military Cemetery at Burma Camp in Accra.

Prior to his internment, the mortal remains of the former President will be placed on a “gun carriage” and paraded through some principal streets of Accra.

Ghana’s longest serving head of state passed away on Thursday, November 12, 2020, at the Korle-Bu Teaching Hospital, after a short illness.

Werner on Chelsea: The period when I didn't score was the worst of my career
Ole Gunnar Solskjaer: You're in the wrong place if you're at Manchester United and you like to lose. I may be the worst loser in the club
Ko vid-masks of the Leopard are recognized as the best in Spain. Efficiency - 94%
Klopp admitted that he considered the option of Trent and Robertson in the center of the Liverpool defense
Inzaghi on 0:2 with Bologna: Lazio should react differently to a missed goal after an unforced penalty
Tuchel admitted that PSG tried to sign Bruno: they fought hard to get him
Ex-referee Andujar Oliver: Messi did not deserve a second yellow for fighting Kunde. The first one was already excessive
Source https://newsghana.com.gh/jerry-john-rawlings-burial-service-underway-at-black-star-square/

We’re Not Seeking For Legalization ,We Seek For Protection In Ghana

International commercial flights to remain suspended in India until March 31

Zimbabwe denies suspending WHO and UNICEF in COVID-19 programs

South Africa vaccinates over 63,648 in one week

I’m No More A Producer, I’m Bread Seller And That’s My Focus For Now

US soccer scraps ‘no kneel’ anthem policy after vote |

Wiyala Is My Best Musician In Ghana

No One Can Question My Immense Support For The Kumerican Movement

You’re in contempt of the people, retract and apologise for your comment – Kwaku Azar tells Judicial Service

Ghana football players with the most successful careers

No Female Artist Comes Close To Efya, Efya Is A Legend

‘I’m not a stupid blonde, I’m just very good at pretending to be’ says Paris Hilton

Lady bites another lady in the eye

Give us a break! Don’t think we’re not intelligent – LGBT+ proponents told

Hearts, Kotoko encounter: Fans must be at the stadium – Hearts legend urges

Read A Hilarious Chat Between A Pastry Chef And A Customer

Why has nothing been done to Ken Agyapong over Ahmed Suale’s death? - Manasseh Azure asks govt

Tima Kumkum Finally Finds Love In Kuami Eugene After Years Of Being Single? » ™

U-20 Afcon: Ghana to face Gambia in semi-finals

2 dead, one injured in galamsey pit in Western Region

Biden warns Iran to “be careful” after United States airstrikes

We are all sinners – Ghanaian transgender tells LGBTQ+ critics –