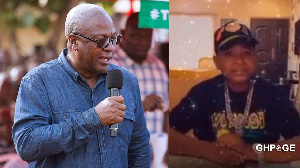 Mr Mahama gave this assurance when he paid a courtesy call on Nyeliboligu-Naa Yakubu Andani Dasana II, the Regent of the Nanumba Traditional Area at his Palace in Bimbilla in the Northern Region.

The Courtesy call forms part of the Presidential Candidate's three-day campaign tour of the Northern Region.

He noted that the NDC was committed to peaceful elections in December.

"We are a peaceful people and so NDC is looking forward to a peaceful election. We believe that the people of Ghana should be allowed to cast their votes in peace. And the will of the Ghanaian people should reflect in the elections that we are about to hold," he said.

"And so I can assure you that if there will be any violence or any disturbance it will not come from the NDC. And so I urge all our people to be activists in their polling stations.

Own your polling station, don't think that just because there are electoral officers and party agents overseeing the polls it means that you can relax and go to sleep.

“Let all of us keep an eye and be vigilant in our polling stations to ensure that nobody comes to disrupt the elections and therefore, prevent our voices from being head."

The Presidential Candidate told the Nyeliboligu-Naa that he had been blessed to have known his father and worked closely with him, adding "and also thank you for the cooperation that I enjoyed when I was President with you in terms of ensuring peace and unity in the Nanumba Traditional Area."

"I am happy today that we are still living in peace and unity and it is my hope that any remaining outstanding issues that create peace in Nanung will be done, so that Nanung can progress as fast as it deserves to do."

Mr Mahama said there were several things that they were working on together in terms of the whole of the Nanung Traditional Area.

He said when the NDC was in Government, they undertook a lot of development projects including electrification, stating that he was privileged to be the one to commission the Bimbila water system, which was now facing some challenges.

He said there was the need for expansion of the Bimbila water system because its population was increasing astronomically.

"In our time we continued with the Eastern Corridor Road, which is a very important road not only for the people of Bimbila but the whole of Nanung Traditional Area.

Unfortunately, since NDC left office, most of these projects have come to a standstill. And in four years, Bimbila and the Nanung Traditional Area have seen very little development," he said.

"It is my hope and prayer that the people of this area will stand behind the NDC in the forthcoming election, so that NDC can come back and continue the good works that it was doing before it left office."

Mr Mahama said it was clear that the New Patriotic Party (NPP) administration had been full of only promises and a lot of talk without any action.

"Four years of NPP administration has been characterized by hardship, lack of development, no extension of electricity, no additional water systems, no hospitals, no schools, no roads, no market, indeed, stalled development," he said.

"And it has also been characterized by high youth unemployment. They've not being able to put in the solutions that will be able to give our young people a chance to be able to find employment in the world of work," according to Mr Mahama.

Mr Mahama appealed to Ghanaians to vote the NDC back to power for it to continue its good works.

The Presidential Candidate is being accompanied on the three-day campaign tour key party functionaries such as Professor Joshua Alabi, the National Campaign Coordinator, Chief Osofo Azorka, NDC National Vice Chairman, Mr Haruna Iddrisu, the Minority Leader in Parliament, Mr Julius Debrah, a former Chief of Staff at the Presidency; Alhaji Huudu Yahaya, a Member of the NDC Council of Elders, the Party's Members of Parliament and former Ministers of State.

Andrea Pirlo: In my 1st season at Juve, we were behind Milan, but we took the title. Everything depends on us
The judge made two mistakes. De Gea was pushed and there was no foul on our cancelled-out goal. Solskjaer on the loss to Sheffield
Maguire on the defeat to Sheffield Wednesday: We gave the opponent two goals, we didn't play at the level we expected
Wilder on registration in the Premier League: I don't want to talk about the beginning of an incredible rescue. We just want to show what we are worth
Ronald Koeman: Barcelona in a difficult month with an abundance of outings showed character and deserved their victories
Frankie de Jong: I started to play closer to the penalty area, so I score more
Manchester United's 13-match unbeaten streak in the Premier League was Interrupted
Source https://www.ghanaweb.com/GhanaHomePage/politics/John-Mahama-reiterates-commitment-to-peaceful-election-1120337