Joseph Esso could be set for sensational Hearts of Oak return 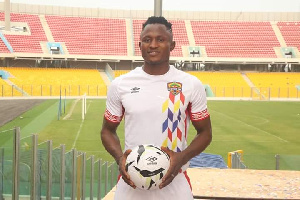 Esso has been released by Hearts

Ghanaian striker Joseph Esso could be making a shocking comeback to Premier League (GPL) side Hearts of Oak, only days after parting ways with the club.

The forward and the Phobians went separate ways on Friday, much to the surprise and dismay of fans of the Accra-based outfit, after failing to successfully negotiate a contract renewal.

He was one of five players announced by the club for an exit.

"Many of us were taken aback at the news of the release of Joseph Esso, so we spoke to management to find out and later met Joseph Esso," Hearts National Chapters Committee vice-chairman Salu Joe told Oyerepa FM.

"One thing we realised was that both parties were not ready to come to a compromise, they had to take entrenched positions."

"We are waiting to hear from the player and then meet management also, so we find a way out of this."

Esso, who played 14 games and netted on three occasions in the Premier League last season, said after Hearts announced their separation: "I've seen it [exit announcement post] on their [Hearts] social media and no one owns their media accounts. I have nothing to talk," Esso told OTEC FM.

He signed for Hearts from Ebusua Dwarfs in 2018.

"Joseph Esso opted for only a one-year contract extension contrary to what Hearts were requesting for. His demands caused our decision to part ways with him," the Phobians public relations officer (PRO) Kwame Opare Addo told Sikka FM.

Esso was among Ghana's best players at the 2019 Wafu Cup of Nations in Senegal where he netted twice to help the side finish as runners-up.

After his good showing at the cup tournament, the attacker was heavily linked to Sudanese side Al-Hilal last December.

Defenders Benjamin Agyare and Christopher Bonney as well as attackers Bernard Arthur and Abubakar Troare, are the other four players who joined Esso through the exit door on Friday.

Jose Mourinho: what happened to Dyer is not normal, he was dehydrated. If the League management doesn't care about the players, I don't
Jose went berserk twice during the match with Chelsea: ran over Lampard and ran to look for Dyer - he rushed to the toilet right during the game
Lampard on relegation from the League Cup: we Need to keep a positive attitude. Everything will come if Chelsea score second, leading the score
Call of nature, what can you do? Dyer explained why he ran to the dressing room during the match with Chelsea
Mourinho and Lampard shook hands before the penalty shootout. In the first half, they had a fight
Dest arrived in Spain to complete a transfer to Barca
Lionel Messi: I Am responsible for my mistakes. I wanted Barcelona to become stronger
Source https://www.ghanaweb.com/GhanaHomePage/NewsArchive/Joseph-Esso-could-be-set-for-sensational-Hearts-of-Oak-return-1030420

BBNaija: ‘I Never Had Feelings For Ozo’

Mahama has no vision & credibility, are we really going back for incompetence? - Bawumia

NDC will protect the vulnerable in society - Asiedu Nketiah

Over 2,200 Ghanaians Rescued In Lebanon

Election 2020: We’ll Deal With Trouble Plotters To Know That Gov't Has Power – Akufo-Addo

Our database does not contain any duplicates currently - EC

Over 80% of SHSs, Teacher Colleges Connected To Free Wi-Fi — Bawumia

Shocking: Rabies claim one life in every 15 minutes

Contenders for Ghanaian Footballer of The Year In 2020

C.K Akonnor is not a world-class coach to earn $25,000 every month - Ade Coker fires

Vote for competence and leaders you can trust – President

Political Parties to prioritise NCDs as they campaign for Power

There was a rise in crime during COVID-19 lockdown-survey

Centre for Child Protection creating opportunities for women in agribusiness

‘I Am Still The Best Rapper The Streets Have Ever Heard’

You need more to live on during pension – Dr Dzikum

We are in control of the situation- Ho MCE

I will bring 3,000 NDC youth to the NPP – NDC defector promises

Atwima-Agogo cries for market and clinic

Offinso accident victims to be buried

I regret not serving under Mahama – PC Appiah Ofori