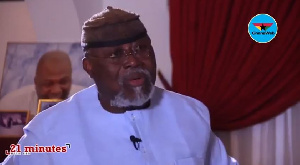 Statesman and founding member of the New Patriotic Party (NPP), Dr Nyaho Nyaho-Tamakloe has emphatically stated that a lot of Ghanaian journalists are the lead causes of some issues the country is currently facing.

Based on some personal encounters he has had, he shared that a couple of journalists are corrupt and take monies from government, influencing them to keep mute about the current happenings in the country.

Speaking to Samuel Eshun on e.TV Ghana’s Factsheet he said, “That facade of having numerous newspapers around is rather destroying our democracy because most of you journalists are the cause of all the problems we have in Ghana because you take money from government”.

He asserted that they go about this corrupt act covering up the truth with the intentions of not being caught and taking money in return.

He highlighted that those involved in this corrupt act should take note, “At the right time it will come out because you might think people do not know and you write all sort of things in the press”.

He said he doesn’t like to address such situations because he believes nothing will be done about it. “There have been instances where individuals have been exposed by an undercover journalist and yet still nothing was done about it so there is no need going into it”.

He cautioned journalists into such activities to put an end to it because he believes at the right time the truth will be out which will have its own implications.