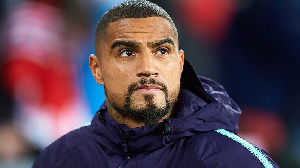 The Portuguese international is regarded as the most hard-working player on the planet.

His dedication and love for football remain unquestionable.

The former Real Madrid forward despite breaking records still aim high and according to Boateng who played for AC Milan and Barcelona, speaking to DAZN' exalts his colleague Cristiano Ronaldo, indicated as a true example to follow for young footballers.

"A war machine, it's impressive how well it is managed.

"All young people should have him as an idol," he said.

Bale scored in the FA Cup for the first time since 2013. He has 4 goals in 13 games at Tottenham
Frank Lampard: I didn't have enough time to take Chelsea to the next level
Ozil will receive 3 million euros in Fenerbahce from July. Lifting - 550 thousand
Phil Neville now coaches the Beckham Club in sunny Miami. I left the England women's national team for this before the Olympics
Chelsea hope Tuchel will be at the match against Wolverhampton on Wednesday
Antonio Conte: Inter lost 0:2 in the last derby. We need to play Milan more decisively in the Cup
Pioli about the Italian Cup derby: Milan wants to win the Italian Cup, but we have a very difficult grid
Source https://www.ghanaweb.com/GhanaHomePage/SportsArchive/Kevin-Prince-Boateng-charges-young-footballers-to-emulate-Cristiano-Ronaldo-1120784

Drama as thief gets stuck on rooftop [Watch]

Okraku-Mantey recounts something important his father told him

Lady Who Played Single On Twitter Busted By Her Boyfriend, Asks Her To Park Out And Bring Back His Car

Afia Schwarzenegger Mocks Mzbel As Her Plot To Kill Her Backfires

Mark Okraku-Mantey Speaks About His Relationship With Blakk Rasta

‘I Do Not Hate Buhari, I Detest His Leadership Style’ – Ezekwesili

Cecilia Marfo Has An Empty Spirit

‘Zapp Mallet Is The Best Sound Engineer In Ghana’

Meet the Ghanaian designer who made clothes for Rawlings

Rawlings’ last days were not his best; this is why

Nana Addo opposed to stay of proceedings by Petitioner

My father was a perfectionist — Zanetor

Rawlings will receive a 21 gun-salute on Wednesday — Gov't

I would have slapped the spirit out of Cecilia Marfo- Kumchacha

AFCON U-20: Coach Karim Zito to alter Black Satellites squad ahead of tournament

GRA, NIA to implement merger of ‘Ghana Card’ ID with TIN from April 1

I Couldn’t Eat After Hearing The Sad News

Laycon Excited As He Hits 900K Followers On Twitter

MTN Ghana gets approval from regulators to buy back shares

One arrested for alleged murder At Manhean

Business activities slow down at AICC due to security restrictions

Vigilante group hunt for homosexuals in parts of Accra

Referee Brobbey to officiate at 2021 U-20 AFCON