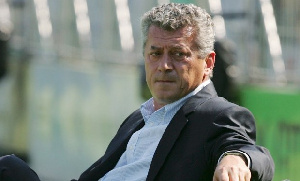 Head coach of Accra Hearts of Oak, Kosta Papic, has called on the fans to be patient with him as he works around the clock to turn things around.

The Ghana Premier League side has had a disappointing start to the season; playing two games in the season, drawing and losing as they attempt to end their 11-year league trophy drought.

The 60-year-old has been confirmed head coach of the club yesterday, his second stint with Hearts of Oak. The first in the 2008/09 season, the last time they won the league.

“We’ve not won the league for almost 11-years, so it’s up for us to win the trophy,” he told Wontumi Radio.

“That will be good for us as coaches, the players and for the supporters, so I will do my best to succeed on that.

”I would like to tell the supporters to be patient with me, I have just arrived.

“I did not have a preseason with the club and I barely know the players here. I will start training with the squad to know what to do.”

Papic might take charge of his first game as Hearts of Oak host league leaders Karela United at the Accra Sports Stadium on Friday, December 4, 2020.

Frank Lampard: Back in December, Chelsea were in great shape. I am concerned that we lost it so quickly
Rodgers on Leicester's fight for the championship: It's too early to say, but in the first half of the season we played consistently and at a high level
Only in one season in the Abramovich era did Chelsea score fewer points after 19 rounds than they do now. Then Mourinho was sacked after 16 games
Werner has not scored in 11 games in the Premier League. He has 1 goal in his last 15 games for Chelsea
Manchester United are ready to offer 12 million euros for defender Lance Medina. In September, he was called up to the Argentina national team for the first time
Player Eibar Enric and defender Girona Luna were sentenced to 2 years in prison on probation for publishing a video of a threesome
Bayern will play Egypt's Al-Ahly or Qatar's Al-Duhail in the Club World Cup semi-finals
Source https://www.ghanaweb.com/GhanaHomePage/SportsArchive/Kosta-Papic-calls-for-patience-as-he-tries-to-turn-things-around-at-Hearts-of-Oak-1124636

Opambour reacts to the tragic death of Ama Broni