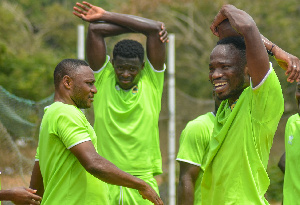 Asante Kotoko's Ghana Premier League encounter with Bechem United which was scheduled for Thursday has been postponed, the Kumasi-based club has announced.

The scheduled matchday 16 fixture had to be rescheduled owing to a heavy downpour which made the Accra Sports Stadium pitch unplayable.

No official communication has yet come from the Ghana Football Association on the subject but the governing body is expected to soon make an announcement about the status and future of the game.

It is unclear if the tie will be rescheduled to Friday as was likely to have been done under ordinary circumstances, considering Kotoko will then only have two days to prepare for their upcoming showdown with archrivals Hearts of Oak on Sunday.

"Our game this evening has been called off due to the rains. We await further directives from the Ghana Football Association," Kotoko has announced on social media.

Our game this evening has been called off due to the rains. We await further directives from the Ghana Football Association. #AKSC #AriseLetsBuild #WeMove pic.twitter.com/Ohdyh94xbR

Kotoko was due to return to GPL action against Bechem, having missed the matchday 16 round of games last weekend owing to their participation in the Caf Confederation Cup.

Eliminated from the continental gathering despite a 0-0 draw away against Algerian outfit ES Setif on Sunday, the Porcupine Warriors had hoped to promptly bounce back with three points against The Hunters to appease their fans.

The side currently occupies the seventh position on the standings, five points adrift of league leaders Karela United. With three outstanding games, however, the Warriors have a good chance of taking over the top position.

Bechem, meanwhile, was eyeing an upset to earn a first win in three games, having drawn 1-1 with Legon Cities in their last match after a 2-0 away loss to Medeama.

The Hunters are just one place above the Fabulous Boys on the league table although both teams have the same number of points.

Kotoko is bracing themselves for Sunday's big game against Hearts in what is the biggest fixture of the domestic football calendar.

The two teams are unarguably the biggest in Ghana and the most successful in the history of the Premier League. Of the two, Kotoko sit supreme with 23 titles, four more than Hearts, who are also interestingly tied on the same points with Kotoko on this season's league table but with a better goal difference.

Pep Guardiola: Man City will play in the Champions League for the 11th consecutive year. This was not possible for anyone in the Premier League
Yevgeny Savin and Tennisi held the first selection for the Krasava football club
Aguero's agent is based in Barcelona. Barcelona are Interested in the player
Andy Robertson: Few believe in Liverpool, but we're still in the game
Klopp on the Real Madrid game: Liverpool have nothing much to lose. We will try to win, and then we will see
Borussia Dortmund coach Edin Terzic shared his thoughts about the upcoming game with Manchester City in the 1/4 League final
Ilkay Gundogan: Holand is an amazing player. He has the right attitude to climb to the top

Diesel price to fall, petrol to remain stable in second half of April – IES

Ghanaian referees should protect skillful players in the Premier League

Siri, when is the next Apple event? Siri says it will be on April 20