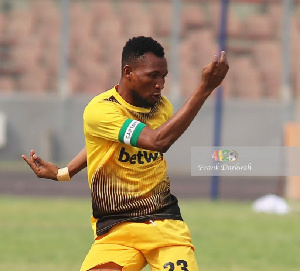 Kotoko are set to unveil Emmanuel Keyeke, Latif Anabila and Yusif Mubarik as their new signings.

The three players have completed deals with the Ghanaian giants pending an official announcement.

A special unveiling ceremony will be held next Friday where they will be shown to the public.

Keyeke, one of the highly-rated midfielders in the Ghana Premier League will be joining the Porcupine Warriors from Karela United with Anabila and Mubarik also joining the club from city rivals Ashanti Gold.

Mubarik comes in to fill a void left by Empem Dacosta who crossed boundaries to Ashanti Gold.

Kotoko have been quiet in the transfer window despite reportedly offloading several players.

The Ghana Premier League record holders lost top man Songne Yacouba after the player refused to renew his contract with the Club with the Burkinabe international joining Tanzanian side Young Africans.

Coach Maxwell Konadu is said to have omitted the likes of Kelvin Andoh, Maxwell Baakoh and Sam Adams from his squad ahead of the new season hence will need to find replacements.

Meanwhile the Reds are still negotiating a deal with Medeama to make Justice Blay’s move permanent after the player impressed on loan at the Club.

Marcus Rashford is the pride of all England, from the Queen to Jurgen Klopp. He again fed children across the country - and received the Order
Pjanic-Habibu: Good luck, brother. Inshallah, we will win
Klopp on Rashford's charity: I hope mom is proud of him. I'm proud
Troy deeney: I was called a black asshole, and social media said it wasn't racist. Do companies even want to change this?
Miralem Pjanic: Sorry didn't trust the players at Juventus. It's a shame when people are judged incorrectly
Wenger on why he didn't mention Mourinho in the book: he Didn't want to talk about Jose, Klopp or Pepe because they are still working
The perfect project to lose money. An idea for dreamers. Tebas on the European Premier League
Source https://www.ghanaweb.com/GhanaHomePage/NewsArchive/Kotoko-to-unveil-three-players-stars-next-week-1063180

Bring down Lekki Toll Gate permanently and build a statue for every one killed that night: Health Commissioner

Guardiola continues to back Aguero over female linesman incident

Foreign Direct Investment inflow rebounds as Ghana records $785.62m in 1st half of 2020

‘You Are A Dictator, Sociopathic Disgrace’ – Fani-Kayode Attacks Buhari

Wendy Shay Calls For The Wrath Of Ghanaians With Her Latest Post; Claims They Fear Her

Sanwo-Olu Releases Names Of Police Officers Under Prosecution In Lagos

We Are Coming To Share Your Husbands With You

‘Salma Mumin is A Liar, She Should Apologise To Us Or Get Sued’- MTN Bares Teeth On Ghanaian Actress » ™

Diana Hamilton reveals how ‘shaba’ dress shamed her on stage

Omotola Apologizes For Her Insensitive Tweet About The Lekki Tollgate Shooting

John Mahama is a spirit; he should be feared - Appiah Stadium warns Abronye DC

I Told Shatta Wale He Will Be Great-Tinny Says

Election 2020: Being number 1 or 2 means nothing; what's all this superstition about? - Kwesi Pratt queries