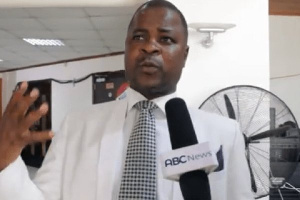 He rather spent a good part of the day refuting claims of an opponent, Lydia Adakugu, the NDC parliamentary candidate for Tempane, in the forthcoming Ghana’s Election 2020, of poor show for development projects in the constituency.

At a press conference in the Parliament House, Osu, in Accra, the Deputy Attorney General, who is also the MP for Tempane Constituency, Mr Kpemka referred to a reported interview granted by his opponent to an Accra media house, in which he was accused of doing little to improve the lives of the constituents since becoming MP in 2017.|

“The claims are unfortunate and untrue; you may crosscheck the facts on the grounds in Tempane for yourselves,” Mr Kpemka said.

He listed a number of projects that he had been developing or completed since he became MP, and began serving as Deputy Attorney General in the Akufo Addo-led Government of the New Patriotic Party (NPP).

“When I got elected into office, I was fortunate and privileged to be appointed to the position of Deputy Attorney General. Three years and even months down the line, I think I have done my fair share of development in the area,” Mr Kpemka said.

He identified the area as a vegetable growing area, where a lot of onions are produced and said nine of the dams, under the One District One Dam programme, nine of 10 dams proposed are fully completed to support dry season gardening.

On the road network in the Constituency, the MP said the six major roads are being given a massive facelift, with gutters, culverts and bridges, attracting a cost in excess of GH¢60 million.

Other project were 13 Basic Schools at various stages of completion , with seven at the roofing levels, and two brand new dormitories for the local Senior High School have been completed and being used,

The MP said during his term, about 3000 pieces of furniture had been provided to Basic schools.

According to the legislator, he was also sponsoring the mock Basic School Certificate Examination, and procured mathematical sets for BECE candidates.

Mr Kpemka spoke of initiatives that led to the procurement of a bus just last week for the SHS.

He also said he assisted a number of the constituents to get enrolled in the Teacher Training College, and through his influence, about 500 persons had been engaged with the Forestry Commission’s afforestation programme.

The Deputy Attorney General said he had got about 3000 people on to Microfinance and Small Loans Centre (MASLOC), for which each person had been given GH¢1000.00 as start-up capital for small scale businesses.

Atletico are in talks with Arsenal to buy out Torreira
Kulusevski scored with the sixth touch and the first shot for Juve-this is crucial in the debut victory of coach Pirlo
Real Madrid was the first in La Liga to release 4 players born in the 2000s
Messi says goodbye to Vidal: I always thought you were a phenomenon. Our paths will cross again
Zidane about 0:0 with Sociedad: Real Madrid lost two points. Overall, we played well
Real Madrid have lost points in 1 La Liga game in 5 of the last 8 seasons as Champions
Andrea Pirlo: I don't want to just copy someone's ideas, I have my own
Source https://www.ghanaweb.com/GhanaHomePage/NewsArchive/Kpemka-s-birthday-plans-hijacked-by-his-NDC-PC-opponent-1033411

When Shatta Wale ‘cried’ over loss to sister [video]

Policeman dies after running into a stationary truck at Oda

#BBNaija: “After you have $ex with Neo, you’ll know if the relationship will work or not” – Laycon advises Vee

We’ve Not Received Any Injunction, Our Strike Continues – GRNMA

#BBNaija: “We just want to make sure you don’t get that third strike. So, apply sense” – Vee warns Ozo after he wanted to share the luxury lounge with Nengi

14 bodies recovered after bus plunges into river in Nigeria

I don’t joke with my $ex toys. I will use them instead of having sex on TV – Nkechi Blessing

Speeding was cause of accident killing six juvenile players

No School children was drowned in floods-NADMO Director

Men encouraged to be agents of change

Man kills ‘side chick’ for rituals, cuts her into pieces

GPL, Division One to resume without spectators

GPL, Division One League to resume with 25% spectators

#BBNaija: ‘I may run for president in future’ – Prince reveals desire to join politics

The Great People Of Edo State Have Spoken – Obaseki

LIVESTREAMING: Akufo-Addo’s 17th address to the nation on measures to fight coronavirus

PLAYBACK: Akufo-Addo’s 17th address to the nation on measures to fight coronavirus

Cardi B explains why she filed for divorce from Offset, says ‘sometimes people really do grow apart’ (video)

‘Most Men Are Intimidated By Confident Women’

These are the issues driving the massive upcoming elections in Ghana

Election 2020: NDC to deploy lawyers in all 275 constituency collation centres

‘I Hope My Upcoming Album Brings You Joy’

Some Of Our Staff, Election Results Missing In Orhionmwon LG — INEC