Kwesi Pratt to vote for Akua Donkor as President? 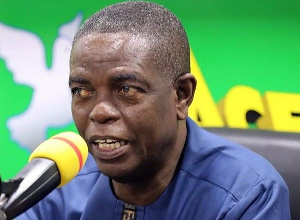 The three months maternity leave has however become a bone of contention as some critics argue it's too short a period for the lactating mothers while others are tossed between how many months or weeks that they want the mothers to embark on their leave.

One strong opponent to the three months leave is seasoned journalist Kwesi Pratt.

Kwesi Pratt Jnr, who is the Editor-in-Chief of the Insight newspaper, is of a strong view that women should be allowed to go on a year maternity leave.

His reason is very simple and that is to say, it will give the mothers ample time to spend looking after their babies.

''In fact, the addition of one month is small. Any person who's seen a six-week baby and the measures we have say that when your baby is six weeks old, leave the baby home and go to work; then you are wicked," he maintained during a discussion with sit-in host Nana Yaw Kesseh on Peace FM's 'Kokrokoo' programme on Friday, September 18.

Kwesi Pratt has also pledged to cast his ballot for any Presidential candidate who will promise a year maternity leave for female workers.

Although Kwesi Pratt's allegiance lies with the Convention People's Party (CPP), by virtue of his pledge, any political party whose manifesto captures his request will automatically have his vote.

It appears Kwesi Pratt has already found the party and Presidential aspirant he will be voting for in the December 7 polls.

The party is the Ghana Freedom Party (GFP).

The founder and Presidential candidate for the GFP, Akua Donkor has launched her manifesto and in the manifesto, one of the things on her heart is to extend maternity leave from three months to one year.

Juxtaposing the words of Mr Pratt and Akua Donkor's promise, it may be right to say the veteran journalist will vote for Akua Donkor and her Ghana Freedom Party.

However, the EC has pegged its filing fee for Presidential candidates at Ghc 100,000 which means Akua Donkor's ability to pay the fee will determine whether or not Mr. Pratt will honour his word to her and not a different aspirant.

Metz forward Gyan is the best player in Ligue 1 in September. He is the leader of the goalscoring race
Miranchuk is able to play in almost any club in the world. Ex-midfielder Loko Drozdov about Atalanta newcomer
Bale on Tottenham start: I'm not completely ready yet. I'm trying to get in shape
Ex-Barca coach Sethien can take over at Palmeiras
Fonseca about 2:1 with young boys: Gave a break to some. Now Roma will focus on Milan
Highlight of the month: the Rangers forward scored from 50 meters (the farthest goal in the history of the Europa League). Gerrard says he's never seen anything more beautiful 😍
Mourinho on 3:0 with LASK: Difficult opponent, but Tottenham played so that the victory seemed easy
Source https://www.ghanaweb.com/GhanaHomePage/NewsArchive/Kwesi-Pratt-to-vote-for-Akua-Donkor-as-President-1064887

Brooklyn Beckham and Nicola Peltz ‘postpone wedding due to Covid-19’

Buhari is a failure and an irresponsible leader, he can’t control Nigeria - Obiri Boahen

Green Partnership: Africa And Europe Together

Africa, An Especially Well Represented Continent At The 24 Hours For Climate

Boniface, Xavier Sosu to slug it out at 3FM’s Constituency debate today

Moment Archbishop Duncan-Williams prophesied about #EndSARS and other global uprisings

Silence is complacency, cyber bullying will not work – Fatima Ganduje-Ajimobi

#EndSARS: ‘Why Is Everyone Begging The Youths To Remain Calm?’

Ghanaians hit back at Nigerians for disrespecting President Akufo-Addo

Kudus to be out for months - Ajax

Dec 7 Polls: Get on the back of the elephant – Akufo-Addo woos Voltarians

Media should be responsible in crises reporting

'Difficult to even interrogate this absurdity,' it's 'kids’ stuff!' - Baako on Otokunor's accusations

Election 2020: Position on ballot paper won't save you; what's written is written! - Kwamena Duncan to Mahama

Bobrisky Set To Assist The Family Of Late Oke, Who Was Stabbed By Thugs

#EndSARS: Mark Angel Almost Beaten Up By Angry Protesters Who Accused Him Of Using Them For Comedy (Video)

Proxy/Transfer exercise to end on October 23

EndSARS: “Old Governors Coming Out To Speak Are All Part Of The Problem” – Mr Eazi

Media should be responsible in crises reporting – Oppong Nkrumah

Do not speak when angry—NMC Chairman

Population and Housing Census to begin in April 2021

Social Media User Threatens To Drop Names Of All The Nigerian “D!cks” Kafui Danku Is Chopping

Cameroon sacks coach ahead of CHAN

#EndSARS: It makes no sense that thugs are looting and vandalizing shops — Erica

Pamela weeps bitterly as she rains curses on Nayas

GIADEC NOT CONFORMING TO NATIONAL AND INTERNATIONAL TRANSPARENCY AND ENVIRONMENTAL STANDARDS

“This Fight Is For All Of Us, Not At Each Other” – Fashion designer, Yomi Casual Says After Hoodlums Vandalize His Store (Video)

Apostle Piesie Okyere-Darko Shares Insights About His Book 'The Dream Of A New Ghana: Reality Or Myth?'