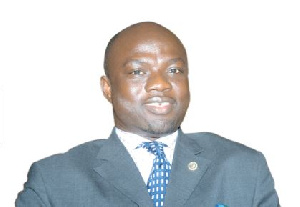 The defence counsel for alleged killers of Abuakwa North Member of Parliament, J.B Danquah Adu, has withdrawn his services in the murder trial.

Mr. Augustines Obuor, who had represented Daniel Asiedu, aka, sexy dondon, and Vincent Bossu, for the past four years, informed the High Court that he had received hearing notice from the Court but he was no longer going to represent the accused.

According to defence counsel, he had read and seen many videos on social media involving Asiedu regarding his admission of the crime to the whole world including jurors in the matter.

“I, therefore, find it difficult to defend this matter when accused persons (Asiedu,) has told the whole world, including jurors that he committed the crime.

I am aware of the law, which states that an accused in a murder trial shall not plead guilty to the hearing of the jury upon his plea being taken,” he told the Court.

Mr Obuor said he found it difficult to comprehend the circumstances of Asiedu as how the jurors would administer justice in the light of the admissions made to the world by him.

He said for the past four years, no High Court was ready to grant Asiedu bail or the second accused, Bossu, so he could have a conference with them, apart from the cumbersome procedure available for his office to meet with the accused.

“I humbly seek to state that I will not be able to represent the accused person from this point. Since the time the matter was referred to me from the Legal Aid, I wanted to do my best in achieving justice in this matter.”

At the last sitting, the Court ordered defence counsel to appear in court or indicate by writing if he was not interested in representing the accused.
The trial Judge, Mrs. Justice Lydia Marfo, thanked counsel for honouring the Court’s invitation saying “I respect, however I doubt if some of the reasons for the withdrawal are something I can buy into.”

The trial Judge noted that as lawyers, public sentiments and opinions did not establish a prima facie case against an accused.

She said as soon as jurors were empanelled, the Court would inform them about their duties, including abandoning of stories they might have heard and concentrating on the evidence of prosecution adduced in court.

According to the Court “ethics of our job do not permit us to use sentiment and emotions of people to judge others.”

The Court formally discharged Mr. Obuor and ordered that the Regional Legal Aid Director be notified for new lawyers to be appointed.

The case has been adjourned to December 16 for the empanelment of jurors.

Asiedu and Bossu are facing a charge of conspiracy.

Asiedu is additionally facing a charge of murder.

The two are believed to be involved in the murder of the late Legislature in his home at Shashie, near East Legon in the year 2016.

The Court has preserved their pleas and remanded the two into prison custody.

Kramaric scored the 74th goal in the Bundesliga, breaking Olic's record among Croats
Suarez has 12 goals in his first 15 games for Atletico - the best start in La Liga for a new club since Ronaldo
16-year-old Small - the youngest player in the history of Everton
Solskjaer on 3-2 with Liverpool: Manchester United won on their own terms. It's a good feeling
Hames scored 10 (3+7) points in Everton's home matches. Away - 0
Suarez scored his 12th goal of the La Liga season. Messi has 11
Miller on the Manchester United defeat: Devastated. There is no second chance in knockout football
Source https://www.ghanaweb.com/GhanaHomePage/NewsArchive/Lawyer-for-alleged-MP-Killers-withdraws-from-trial-1120415

NDC to hold symposium in honour of Rawlings

Akufo-Addo had no option but to downsize his gov’t, scrap superfluous ministries – Joyce Bawah Mogtari

We enjoyed working with Letsa, thank you for reappointment, love for Volta— Avenor Traditional council to Akufo-Addo

Thank you for re-electing me – Oppong-Nkrumah to constituents

“Enough is Enough” demonstration in Ho not sanctioned – Police

Rawlings' legacy would lead all to hunger, thirst for probity and accountability — Palmer-Buckle

Preserving the Heroines and Heroes of Ghana

Our ‘Whom you know’ Canker

Truck-pusher crashed to death in Mankessim

FA Cup: Abraham hat-trick fires Chelsea past Luton Town and into fifth round