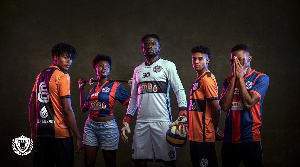 Legon Cities have announced the ticket prices for their matchday four clash against AshantiGold at the Accra Sports Stadium.

The cheapest ticket which is for the Popular stand will be selling at GH?10, while the VIP Upper/Lower will goes for GH?25.

For the centre line, the supporters are expected to pay GH?15 for a seat.

Legon Cities ahead hoping to secure their first win as well as hand the Miners they first defeat of the season. Their confidence is high after their stalemate with Dreams FC on Sunday at Dewu.

Legion Cities ahead of their game against Dreams gave its fans a special treat as they paid 25ghc that included transportation, match ticket and products from their sponsors and a club souvenir.

Coach Goran Barjaktarevic has called on the club supporters to have patience as he builds a formidable squad to mount a strong challenge in the Ghana Premier League.

Legon Cities lie 13th on the standings with 2 points after 3 games.

Newly converted to the cause, Trump to make history by addressing anti-abortion rally

We Won’t Be Distracted By Rubber Stamp Tag: Lawan

Man Escapes Death As Truck Rams Into His Apartment While Asleep

Cocoa farmers urged to seek advice in the application of chemicals

Unite to foster peace during and after the elections – NCCE

Workshop on use of biochar held

The Investment Sector Crisis And The Lessons Going Forward

Daughter of Dr. Osei Kwame Despite ties the knot in a grand style »

Pastor Falls Down And Dies Whiles Delivering Sermon In Church

No One Can Unseat Governor Obaseki: Umahi

Hearts vs Kotoko: Don’t do anything that will get you into trouble

Innocent Blood Will Be Shed To Determine 2020 Election Results

Hearts vs Kotoko: Don't do anything that will get you into trouble - Jesse Agyapong warns

AfAW and Witch Persecution in Africa