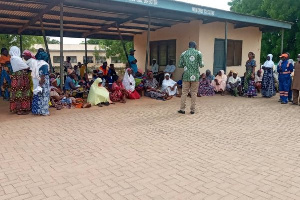 The National Commission for Civic Education (NCCE) has called on Ghanaians to jealously safeguard the values and principles of the 1992 Constitution for harmonious living.

Mr Daniel Baya Laar, the Bawku Municipal Director of the Commission who made the call, said it was a collective responsibility of all stakeholders and members of the public to defend the provisions in the Constitution by being law-abiding citizens.

He said people often violated the Constitution and incited violence, which had the potential of destabilizing the country and every citizen had to discourage such acts.

“As citizens, we are supposed to be very vigilant and report any person who is seen performing any criminal activity to the appropriate authorities,” he said.

Mr Laar was speaking at separate functions in the Municipality, as part of the celebration of the 2021 Constitution Week.

It was held on the theme, “We are one, Ghana first.”

The Municipal Director noted the Constitution Week was one of the numerous flagship programmes of the NCCE aimed at intensifying awareness on the provisions of the 1992 Constitution especially with regards to the rights and responsibilities of each Ghanaian.

He said when Ghanaians were abreast with the laws of the country, they would desist from taking the law into their own hands and that would contribute to deepen and sustain the prevailing democratic governance.

Mr Laar called on Ghanaians to uphold the virtues of the Constitution to promote peace and unity for accelerated development.

Mr Adam Issaka, the Senior House Master of Bawku Senior High/Technical School, lauded the efforts of the Commission to deepen Ghanaians’ understanding of the Constitution, which would help minimize the numerous criminal activities in the country.

Robbery Attacks: ‘Police are not God’

Government urged to create account for immunisation at MMDAs

Kantanka’s photo of an armored car is altered and misleading

is spiritual, I choose music over books – Kojo Wadosty