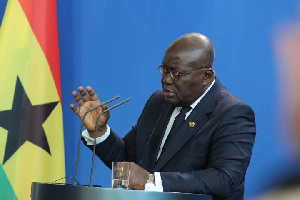 President Nana Addo Dankwa Akufo-Addo who is also the Chair of the Economic Community of West African States (ECOWAS) has urged member countries to continue their contributions to the one billion United States dollar (US$1 billion) ECOWAS Regional Security Fund (ERSF), created in support of the 2020-2024 Anti-Terrorism Action Plan.

He said raising this money has to be a high priority for members, because it enables the region to act independently in this crisis.

Mr Akufo-Addo made the appeal during the Virtual Summit 58th Ordinary Session of the ECOWAS Authority of Heads of State and Government, On Saturday, 23rd January 2021.

“I thank all Member States that are making significant efforts to support our initiatives, in this regard, especially those that have begun to pay their financial contribution to the one billion United States dollar (US$1 billion) ECOWAS Regional Security Fund (ERSF), created in support of the 2020-2024 Anti-Terrorism Action Plan. Raising this money has to be a high priority for us, because it enables us to act independently in this crisis. Your Excellencies will recall that the 2019 Summit created the Fund to cover a five (5) year period, 2020-2024,” he said.

“The Commission is awaiting confirmation transfer instructions for this amount, which will then leave a balance of two hundred and fifty million dollars to be contributed to the Fund by Nigeria.

“The remaining one hundred million dollars ($100 million), which is to be voluntarily paid by the other five (5) countries and other sources, will complete the establishment of the entire Fund. We need to do this as quickly as possible.

“We also need to engage on the growing menace to the maritime security of our region. Acts of piracy and maritime destabilization are on rapid increase in the Gulf of Guinea, illustrated by the data, which indicate a forty percent (40%) rise in pirate activities in the Gulf in 2020 over 2019. This calls for a strong regional response.”

I disagree with the process and ruling of the trial - Mahama

Kenya vows to foster regional unity and peace amid COVID-19

Petitioner to address the media

If you followed the process, you won't be surprised by SC's judgment - Mahama

Winner Takes All: Gyimah-Boadi calls for restructuring of 1992 Constitution

Election Petition: I disagree with process of trial and ruling — Mahama

Election petition: Your own witness Asiedu Nketia proved Akufo-Addo got more than 50% votes – SC to JM

I Regret Getting Signed To YBNL – Temmie Ovwasa

Majority of what we learn in universities not applicable in life

Premier, division one clubs to own U-17 teams

We'll not relocate, find us another market - Traders