‘Life is better than before’: residents around Bui enclave tell their story 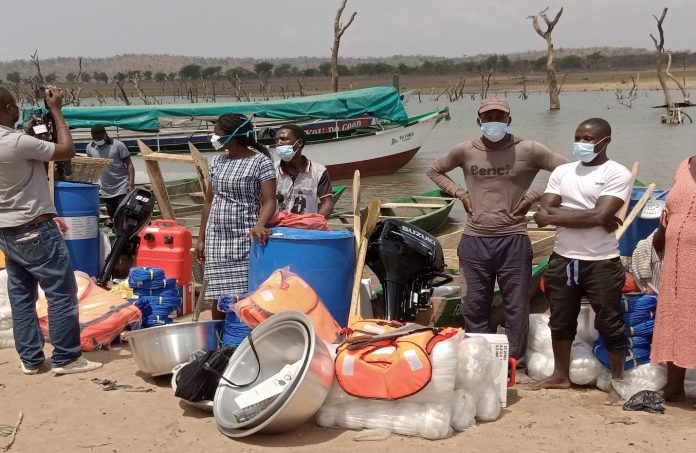 A GNA feature by Dennis Peprah

“Hardly did I think and learnt our relocation here would create these enormous opportunities for our children,” that was the response from Opanin Kwabena Mosi, when I engaged him in a conversation.

He was gazing at what was happening metres away from the town ‘square’ with his hands folded at his chest.

Initially, I wondered what was exactly going through his mind, when other residents could not hide their joy at the historic ceremony.

But, out of curiosity, I walked to his direction, greeted him and in response, he gave me a deep smile.

It was during our conversation that I realised that the 70-year-old renowned fisherman was extremely overwhelmed about the event taking place at the resettlement camp.

Opanin Mosi had gained his popularity because of the instrumental role he played during the protest against the resettlement of the seven villages around the Black Volta River 12 years ago.

Though it went through hell, Bui Power Authority (BPA) was able to relocate the fishing communities, which paved the way for the construction of the Bui Hydroelectric Power Dam.

“We resisted because we felt our livelihoods were in danger. But we never dreamt that our resettlement here would create economic opportunity for us to build on our lives,” Opanin Mosi said.

It was joy and ecstasy when the BPA presented several working tools and equipment to the dam’s Project Affected Persons (PAPs) under its Livelihood Empowerment Programme (LEP Two).

In all they were about 237 beneficiaries whom the Authority has funded to successfully complete different craft and trade skills training and ready to set up their own businesses.

Most of the PAPs are engaged in fishing and fish mongering, fish production, carpentry, mat bag making, auto-mechanic and other trades and craft works.

A tractor with ploughing add-ons was also presented to enhance agricultural mechanization in the BPA’s resettlement communities.

Under the fish production module, the BPA has constructed and handed over 10 fish ponds stocked with 1,000 fish fingerlings to benefit 30 PAPs and the ponds can harvest 700 catfish every six months.

The Authority is spending more than GHC4million to develop and implement 21 business modules under the LEP Two to enhance the socio-economic livelihoods of 815 persons directly or indirectly affected by the operations of the 400 megawatts dam.

The beneficiaries are being supported to engage in fumigation, cleaning services, weeding/ landscaping, lawn and warehouse maintenance, event/entertainment, fishing/fish mongering and other employable skills training.

“LEP Two, therefore, is not a mandated requirement of the BPA, but the clearest demonstration of the Authority’s commitment through the foresight of its CEO to improve the well-being of the PAPs,” Mr. Wumbilla Salifu, the Director, General Services of the Authority, indicated.

Barely 11 years ago, the BPA resettled a total population of 1,216 fisher folks who live at the shoulders of the 400 megawatts power generation dam.

Seven villages including the Bui Camp, residence for the personnel of the Game and Wildlife that supervise the Bui National Park were affected.

This was due to the inundation of about 444 km2 of land by the dam’s reservoir at its full supply level.

Initially, the local fishermen and farmers, and their families, who occupied the shoulders of the Black Volta River, at the Bui gorge, were reluctant to vacate the area for the construction of the national asset.

During a visit, access to modern social infrastructure and facilities such as health care and education, electricity, potable water, major roads, shops and modern latrines in the two resettlement townships had improved.

The resettlements are Bongase in Bono and Jama in Northern Regions, and residents there confirmed to the Ghana News Agency (GNA) that their living conditions had significantly improved, during a visit to the area.

There were also facilities such as schools, community centres, boreholes as well as playing grounds, clinic and health centres.

Access roads and drainage systems were also good while sanitation had improved, as residents who had to either dig the ground to attend to nature’s call or did that in the bushes were now using bio-filled digester toilets.

Technology had also advanced in the townships as digital satellite dishes that enabled residents to access various television channels seen erected on the roof of a number of households.

The construction of the Bui Dam created a reservoir, which is now the source of the economic boom within the environs of the dam.

There were a handful of fisher folks among the 1,216 resettled people before the damming of the Black Volta River.

The main fishing economic activity trend hitherto was for fishermen to come back with their harvest to sell to fish mongers who sell them either fresh or smoked to customers.

With the current fishing boom being experienced at the Bui area, the economic activities have transcended fisher folks because new business opportunities have emerged.

The locals told the GNA their living conditions were far better in their new settlements, and expressed gratitude to the BPA for providing them with their developmental needs.

Nana Kwadwo Wuo II, the Chief of Bui thanked the Authority for its support to the people around the Dam, saying through continuous assistance from the BPA, most of the unemployed young people in the area were engaged in employable skills training while others had started their own businesses.

The Fishermen and fishmongers, confirmed that their fishing businesses were flourishing, but regretted the influx of other colleagues to the communities was making fishing competitive.

Bruno Fernandes: I can create 10 chances, but not score, and they will say that I did not play very well
Holand scored 29 goals in 27 games of the season. In total, he has 45 goals in 46 games for Borussia Dortmund
Alaba leaves Bayern for money. It's reasonable, the career is short. Former Borussia and Juventus defender Jurgen Kohler has commented on the likely departure of defender David Alaba from Bayern Munich
The offer of Real Madrid to Ramos on a new contract will be valid until the end of March
Paulo Fonseca: We've seen how many injuries Real Madrid and Liverpool have. The calendar is inhumane
Leipzig have 6 consecutive Bundesliga wins
Borussia Gladbach lost 5 matches in a row after announcing the departure of Rose to Dortmund