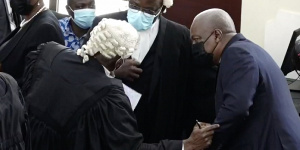 Mahama and his lawyers in court

2020 Presidential Candidate of the National Democratic Congress (NDC) John Dramani Mahama was right to come to court over his grievances concerning the results of last year’s elections, the Supreme Court has said.

The President of the Court said it is within the remit of the 1992 Constitution for Mr Mahama to proceed to court over the results announced on Wednesday, December 9, 2020 by the Chair of the Electoral Commission, Ghana (EC), Jean Adukwei Mensa.

But many wanted Mr Mahama to mount the witness box to provide evidence of his claim.

After Mr Mahama challenged the Court for not allowing the First Respondent to present its witness – Mrs Mensa – for testimony, Second Respondent Nana Addo Dankwa Akufo-Addo also hinted of subpoenaing the petitioner to be in the witness box.

Chilwell on the match against Porto: We only did half the work. Chelsea should not be relaxed
Conceição on Chelsea: Porto have a tough task ahead of them, but we came here to solve it
Presnel Kimpembe: It will be a huge achievement to knock out Bayern, because they is the best team in Europe
Mauricio Pochettino: Bayern are the best club in the world at the moment. Anything can happen
Gagarin was very fond of sports: he played water polo, hockey, volleyball and more
Ibrahimovic broke the anti-bullying rules. He had lunch with Abate and two other people at the restaurant
Thomas Tuchel: Probably, Porto is easier in some ways - they have a clear task, three goals. Chelsea may find themselves in an unenviable position

“Most Celebrities Are Influencing The Youth With Fake Lifestyles”-Okese1

We’re Being Tactful On Broadcasting Bill

Did JM tell you he’ll change Naana if he runs again?