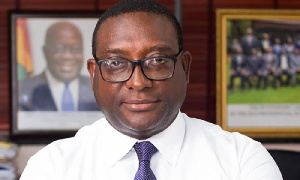 Director of Communications of the New Patriotic Party,Yaw Buaben Asamoa

Mr Boaben Asamoa noted that the 2020 general elections were largely peaceful therefore, attempts by Mr Mahama to discredit the elections will not work.

Mr Mahama had, among other things, accused the Chair of the Electoral Commission (EC) Jean Mensa of rigging the polls in favour of the NPP.

“More than one million extra ballot papers were printed, which the EC claimed happened by mistake but on the day of the elections, some of the more than one million extra ballot papers had already been secretly thumb-printed in favour of the NPP,” he said while addressing the Divisional Chief of Prestea Himan, Nana Nteboah Prah, recently, as part of his Thank You tour of the Western Region, .

He added “And, so, all these things dented the credibility of the polls and caused an embarrassment.”

He added: “I heard her [Jean Mensa] say ‘it’s the best election Ghana has ever had and yet you run away from scrutiny at the Supreme Court.

“So, how do you boast that it’s the best election ever?”

But addressing a press conference in Accra on Friday October 15, Mr Buaben Asamoa who is also a former lawmaker for Adentan said “Only losing candidate Mahama and his cabal in the NDC continue to deceive themselves about the outcome of the 2020 elections . The heart-warming record of achievement that the conduct of the elections chalked deserves better from the one who seeks to lead the country coming next elections.

“In fact, his posture on the election does not edify the sacrifice of Ghanaian voters who queued in defiance of covid-19 to register and vote. Often, the same breadth, he reminds Ghanaian families of the pain of losing loving ones during post votes collation by mischievously referring to the regrettable deaths.

“President Akufo-Addo is on record as saying that not a drop of Ghanaian blood is worth exchanging for electoral victory and the steps he took against vigilantes literally ensured them the most peaceful voting process ever. In the 2020 elections we didn’t hear anything about vigilante groups, the BBC described the elections as boring, as the electoral commissioner has said.

“True leadership will not focus on the unfortunate and painful situation for political gains to the detriment of national peace of mind . In any event, former President and candidate Mahama has a very poor record in terms of political violence.

“He is the one who brushed aside the infractions of the Talensi by-election when guns were flowing about including the vehicle of his party’s National Chairman.”

'What is your true position on the E-levy?' - NDC MPs asked

NSMQ 2021: We were cheated during Grande Finale – Presec contestants lament

CAF Inter-Club Competitions: How Ghanaian Clubs have performed after winning the first leg at home by 2-0

One robber shot dead, two others in custody

Effects of E-Levy on digitalisation will be brief - NDPC boss

Highlights from 2022 budget debate: The alleged impersonation, disagreements and fights

What were the South Africans thinking? - Felix Kwakye Ofosu reacts to FIFA ruling

How Alban Bagbin walked out of meeting over Kevin Taylor insults

'My government’s record in agriculture is impressive' – President Akufo-Addo

Over 52% of Obuasi residents are into agriculture not mining – MCE

2022 Budget: Tyranny of the Minority will never be allowed to stand - Napo

You can't apologize on our behalf – Afenyo-Markin to Sam George

Headache, body pains show the coronavirus vaccine is working in your body – Nsiah-Asare

Private sector appeal for reduction in cost of borrowing

The ghost town inside one of the richest neighbourhood in Accra