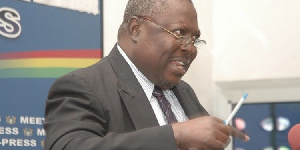 Mr Amidu made this known in a 27-page response which claimed that issues addressed by the Presidency were intended to assassinate his character for simply exposing the true nature of the off-shore jersey incorporated in the Agyapa Royalties deal.

President Akufo-Addo had earlier denied claims by Mr Amidu which suggested interference in his work, therefore, relinquished his position as Special Prosecutor.

"The President on 7th January 2017 took the Presidential oath in which he pledged, inter alia that: that I will at all times preserve, protect and defend the Constitution of the Republic of Ghana; and that I dedicate myself to the service and well being of the people of Republic of Ghana and to do the right to all manner of persons...”

Simeone on the leadership of Atletico in La Liga: We only think about the next opponent
The former defender of Inter, Schelotto has moved to Argentinian racing
Kramaric scored the 74th goal in the Bundesliga, breaking Olic's record among Croats
Suarez has 12 goals in his first 15 games for Atletico - the best start in La Liga for a new club since Ronaldo
16-year-old Small - the youngest player in the history of Everton
Solskjaer on 3-2 with Liverpool: Manchester United won on their own terms. It's a good feeling
Hames scored 10 (3+7) points in Everton's home matches. Away - 0
Source https://www.ghanaweb.com/GhanaHomePage/NewsArchive/Martin-Amidu-refutes-reports-of-Presidency-following-his-resignation-1120412

Suarez strikes again as Atletico march on with Valencia win

NDC to hold symposium in honour of Rawlings

Akufo-Addo had no option but to downsize his gov’t, scrap superfluous ministries – Joyce Bawah Mogtari

We enjoyed working with Letsa, thank you for reappointment, love for Volta— Avenor Traditional council to Akufo-Addo

Thank you for re-electing me – Oppong-Nkrumah to constituents

“Enough is Enough” demonstration in Ho not sanctioned – Police

Rawlings' legacy would lead all to hunger, thirst for probity and accountability — Palmer-Buckle

Preserving the Heroines and Heroes of Ghana

Our ‘Whom you know’ Canker

Truck-pusher crashed to death in Mankessim

FA Cup: Abraham hat-trick fires Chelsea past Luton Town and into fifth round