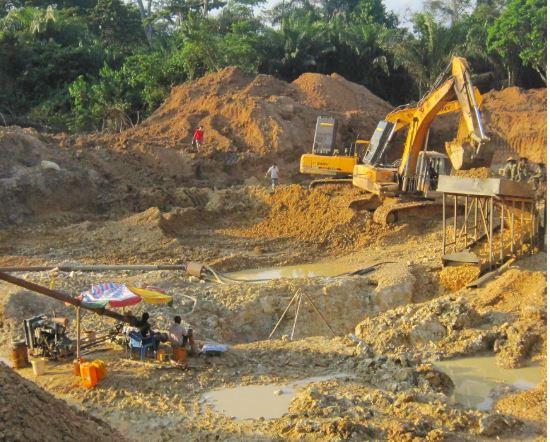 The management of the Yenyeya and Pubortaaba Mining Groups, registered Small Scale Mining groups in the Gbane Mining community in the Talensi District of the Upper East have accused a Chinese Mining firm , Shaanxi Mining (Ghana) Limited for engaging illegally mining in their concession.

The two registered Small Scale Mining have therefore called on the state apparatus responsible for the mining sector to ensure that they dig into the matter to avoid bloodshed in the area.

The two groups raised the accusation in a press statement issued and signed by the Managing Director of Yenyeya Mining Group, Mr Charles Taleog Ndanbon, and copied to the Media here in Bolgatanga on Thursday.

The firm which recently changed its name from Shaanxi Mining (Ghana) Limited to Earl International Group (GH)Gold Limited and seeking for permit to go into large scale mining has since 2008 been providing mining support services to the Yenyeya Mining and Pubortaaba mining Groups.

According to the Yenyeya Mining and Pubortaaba mining Groups , the contract that was signed between them and the company was to provide technical and mining support services to them and not to prospect, process, refine and to sell .

The Groups stated that under the miming law it was not right for service providers such as the Earl International Group (GH) Gold Limited to use the legally acquired concession of the Yenyeya Mining and Pubortaaba mining Groups as gateway to go into large scale mining.

According to the groups, in September, 2008, Yenyeya Mining entered into an agreement with Shaanxi Mining(Ghana)Limited for Shaanxi to provide mining support services to it and later on joined by the Pubortaaba mining Group.

It alleged that the Chinese Mining Company had over the years breached the signed contract and performance of obligations by wrongfully mining, processing, refining, and selling gold outside to country such as Dubai.

The statement also alleged that the Chief Executive Officer of the Chinese Mining Company, Wei Xing with his Ghanaian business partner including Mohammed Aminu Min-Right Consult have refused severally to pay the 7 per cent portion of the gross production of mineral mined at the site due Yenyeya Mining group.

I have always been Ghanaian – Mista Myles speaks on nationality

God Didn’t Tell You He’s Homeless, Use The Ghc100 For National Cathedral To Invest In Health Sector

Serwaa Amihere Shockingly Admits Of Having A Child [Video]

Gospel should not be made free, even the Bible is not – Empress Gifty asserts

“There Is Nothing Extraordinary About “No Pressure” Album-Troll Slams Sarkodie

VIDEO: Drama as dead man comes back to life moments before burial