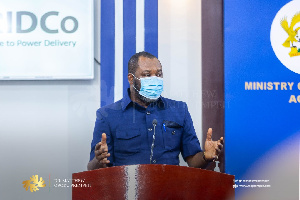 The Ministry of Energy has refuted claims made in a Facebook post by the Member of Parliament for Bongo Constituency, Edward Bawa, in reaction to an earlier press briefing by the Energy Minister, Dr. Matthew Opoku Prempeh, and which was carried by ghanaweb.com.

Edward Bawa’s Facebook post read ‘Hon. Dr. Prempeh, I challenge you to publish all the 40 PPAs you claimed have been cancelled and the 3 renegotiated PPAs from Take or Pay to Take and Pay. These lies must stop.’

In a rebuttal, the Public Relations Officer of the Ministry, Mr. Kwasi Obeng-Fosu, refuted the claims ascribed to the Minister by Bawa and described them as 'assertions of his own creation'.

He clarified that the Minister stated that during the power crisis under the tenure of former President Mahama, government entered into over 40 Power Purchase Agreements (PPAs) to address the power generation issue that had led to the crisis.

"What this government has done is to negotiate a deferral of the rollout of three of these contracts, which means a saving of a total of $1.426bn that would otherwise have been paid to the 3 relevant power producers under the take or pay agreements".

Mr. Obeng-Fosu explained that under the Take or Pay contracts the previous government entered into, government was to pay for the total power generated by the companies, whether or not they were used by the nation, as opposed to a Take and Pay system whereby you pay for what you consume, and explained further that these onerous clauses were agreed to by the then government because of the desperate situation of the time.

However, he stated that government’s position, going forward, was that all new PPAs would be accepted only on Take and Pay basis.

The PRO admonished the lawmaker for not being accurate with the facts and seeking to misrepresent the Minister’s submissions.

Today in History: TOR to refine over 60,000 barrels of crude oil daily

June 2021 robberies that got media coverage

Prices of global commodities as of June 17

Girls Of BitClout: Monetizing Your Time On Social Media Just Got Easier