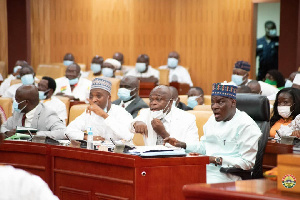 The Minority has a united front claims an NPP MP

Member of Parliament (MP) for the Achiase Constituency, Kofi Ahenkorah Marfo has opined that the Minority in parliament do not have a divided front as some reports suggest.

He notes that from his observation, the Minority is united in parliament with a strong force leading the caucus in parliament.

Commenting on some issues such as the resignation of Okudzeto Ablakwa from the Appointments Committee, the Achiase MP stated that some actions in the house comes as no surprise considering the fact that parliament has been running since 1993 and as such some actions are bound to happen.

However, he adds that these issues are surmountable and believes the Minority caucus can deal with them.

Some weeks ago, there was pressure on Minority Leader, Haruna Iddrisu and Chief Whip, Mubarak Mohammed Muntaka to abdicate their positions following the approval of Finance Minister, Ken Ofori Atta, the breaking of ranks by Isaac Adongo and the resignation of Samuel Okudzeto Ablakwa from the Appointments Committee of Parliament.

Government urged to close down churches for covid-19 non-adherence

NPP and NDC will collapse your business - Kwaku Oteng told

Sunday, May 9, is Mother’s Day

COVID-19 remains a threat to national security in Ghana – Minister

Annoh-Dompreh to sponsor extra classes for over 500 JHS, SHS students in Nsawam-Adoagyiri constituency