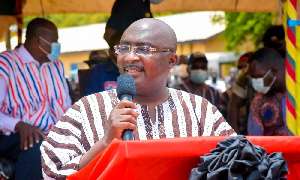 He told Techiman-based Link FM in the Bono East Region that: “On the balance of priorities, mortuaries, for zongos, are not a priority”.

“When a Muslim dies, the body is not kept at the mortuary, it is buried immediately, so, if you want to do something to help the zongo communities, mortuaries are not a priority for them.

“That is why the Ashanti Regional Chief Imam said Muslims don’t want mortuaries but schools to educate their children, so, if you have money to help the zongo communities, mortuaries are not what they want built for them, they would rather have schools from which they can all benefit”, he said.

Earlier in September this year, Dr Bawumia said unlike the biggest opposition party, the NDC which has promised to build mortuaries in the zongo communities in accordance with Islamic custom, the Akufo-Addo government will rather furnish Muslim-dominated communities with model schools, if they are re-elected.

Speaking at the conference of the National Council of Fulani Chiefs, Dr Bawumia said: “We are going to build a model senior high school in the Zongo community in every region, so, we will start with 16 model SHSs so that our children will have an opportunity to attend those schools”.

Just recently, the Chief Imam of the Eastern Region also indicated that mortuaries are not necessities for zongo communities.

Speaking to CTV News, Sheikh Amdani said establishing morgues in Zongo communities is needless because it does not contribute to development.

“We need schools, hospitals, ICT facilities and libraries to bring development and not mortuaries,” he said.

Sheikh Amdani further said that building of mortuaries to store Muslim corpses before burial is not as important as “providing a special place to bathe dead bodies before laying them to rest.”

He reiterated that developing the Zongos through education is better than establishing mortuaries.

Meanwhile, a non-partisan and apolitical umbrella Muslim organisation known as the Federation of Muslim Councils (FMC), has said it is in support of any moves to establish mortuaries to cater to Muslim corpses in accordance to Islamic traditions must be embraced by all Muslims.

A statement signed by the Secretary-General of the group, Alhajj Muhammad Amir Kpakpo Addo on Friday, 25 September 2020, indicated that the campaign promise made by the NDC “smacks of good thoughts for Muslims” and must be welcomed, adding: “It is, therefore, disingenuous of any Muslim to stand in the way of Islam by impugning on the promise to provide decent and dignifying last respect to the Muslim dead regardless who is making the promise.”

Lineker on Liverpool: Huge praise for Klopp's spectacular performance despite injuries
Griezmann on the match with Argentina at the 2018 world Cup: Offered Deschamps 4-4-2 and personal custody of Messi. He listened
Ex-inter defender Maicon may move to Sona from Serie D
IFAB about playing with your hand: Not every touch of the ball is a violation. The final decision rests with the referee
Griezmann on leaving Atletico: I needed a change. The decision was very difficult
Barcelona was the name of Masserano to substitute for injured Pique. Javier refused (Eduardo Inda)
Inter want to sign Giroud in January
Source https://www.ghanaweb.com/GhanaHomePage/NewsArchive/Mortuaries-not-a-priority-for-zongos-Bawumia-1092046

“Take Care Of My Children When I’m Gone”

NFF set for showdown with minister over move to ‘overhaul’ federation |

Rawlings’ family welcomes decision to name UDS after him

“Praying For You And Sending You Positive Energy”

‘If My Fans Ask Me To Contest For Ashaiman MP, I Won’t Hesitate At All’ – Stonebwoy » ™

Bawumia among least-favoured to lead NPP after Akufo-Addo – Survey

Election 2020: Rawlings’s wish is for Mahama to lose – NDP

If We Sleep, We Slip- Blay To NPP

‘Brother Sammy Is Too Small For Me To Beef’

Nana Konadu has not withdrawn from presidential race

Ghana for startups: Pivoting from a tourist attraction to a tech-nation [Article]

Saraki Reacts To Kidnap, Killing Of Worshippers In Zamfara Mosque

Samel Owusu-Aduomi writes: Mourinho’s masterclass against Pep; sign of trophy in the offing?

I can’t sleep, please come back to me – Old man cries over a broken heart

An analysis of Trump’s refusal to concede [Article]

‘I’m your own; vote for me’ – Brigitte Dzogbenuku to residents of Volta Region