Mother of 3 ejected by NDC landlord gets help 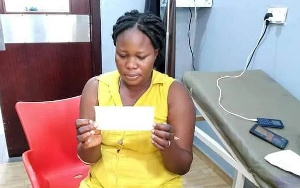 MyNewsGh.com earlier reported that a lady called Evelyn Akosua was evicted from her house because she refused to change her mind on voting for the NDC.

Although Evelyn Akosua was seen in the video that went viral begging profusely, the landlord said he built the house with cash he made from the NDC and will not condone people who belong to the New Patriotic Party.

Evelyn explaining what caused the Landlord to evict her from the house with her three children said ” My son has just completed JSS. I told my landlord that I will vote for Nana so that he can go to school free. The last time he came to the house infuriated, asking me if I had changed my mind.When I said no, he proceeded to my room and just evicted me and my children”.

The Deputy Chief Executive for the State Housing Company Roni Nicol used the opportunity to donate an undisclosed amount to Evelyn for upkeep of her and her children and promised that something bigger will come her way in the coming days.

” This is just preliminary. We are planning something big. I was saddened by the callousness of the Landlord towards the children. Evelyn is going to get something gigantic and it will be announced in due course.

Ricard Puig: It's a pretty tough season, I'm not used to playing so little. Scoring with a header is something unreal
Khabib: I am preparing for my debut in big football. I am a free agent
Former Borussia Dortmund midfielder Grosskreutz has finished his career. The world champion is 32 years old
Marcel is considering Valverde's appointment. Ex-Barca coach does not want to go to a club that does not claim titles
Koeman on 2-0 with Elche: Barca are lucky to have ter Stegen
Flick on 4-0 with Schalke: After 2 defeats to Bayern, it was important to return stability
Ian Wright: Bruno decided. And they said he doesn't score in big matches
Source https://www.ghanaweb.com/GhanaHomePage/NewsArchive/Mother-of-3-ejected-by-NDC-landlord-gets-help-1124630

Take good care of your mother - Palmer-Buckle to Rawlings' children

Razak Yusif starts training with Leganes ahead of permanent move

This Is Why You Won’t Marry Anytime Soon

Let us forgive Rawlings for excesses in his life - Palmer-Buckle

Only “Jon” Boys Will Compare Medikal To Sarkodie

Kantanka is god of Africans, all pastors serve him

Ministerial appointments: We only see a recycled list, no new thinking – Haruna Iddrisu

Alleged drug lord, one of the world’s most wanted men, arrested in Amsterdam

Most People Who Correct English On Social Media Can Hardly Have Real-life Conversations: Sasha P

Rapper Erigga tells men the kind of ladies they should date

Rawlings was an enigma – Palmer-Buckle

Media Schooled On Combat Jiu Jitsu, Grappling And Self Defence

Upgrade your smartwatch with the new HUAWEI WATCH Fit!

Russian policeman fired for posting video in support of Navalny