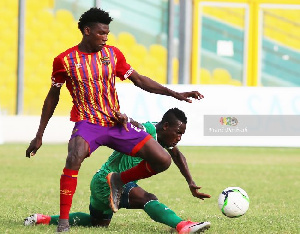 Accra Hearts of Oak players might have enjoyed the best period of their lives after securing the club’s first Premier League trophy in years, but they are certainly not resting on that.

Although the Premier League season is over, there’s the FA Cup to play for and just as Fatawu indicated in an interview, they will go all out for a win.

“We haven’t started thinking of playing in Africa yet because the season is not yet over,” Mohammed stated. “The focus now is to win the FA Cup and end the season as double champions and we are working towards that.

“Until that is done, we are not immediately thinking of next season’s Champions League participation which could be detrimental to our double target.

They will however have to overcome Elmina Sharks in the quarter-finals of this season’s competition to get closer to achieving that dream.

Their opponents, Sharks, endured a scary end to the Premier League, season after battling relegation.

They were however able to escape as their neighbors Ebusua Dwarfs instead joined Inter Allies and Liberty Professionals as the relegated teams for the 2020/21 season.

Their aim in this game will be to go all out to deny the Phobians a double delight this season.

Dvorkovich about Lokomotiv: We can't say that he shines, but he is able to get out of the Europa League group
Lewandowski scored in the 13th Bundesliga home game in a row. This is a record
Inaki Williams has the 200th match for Athletic in a row
Tarjei Bo about Norwegian football players: They have become a model for everyone who wants to use sports as a platform for statements. We must be the same as them
Tyuram about the best players: Lukaku is incredible. Mbappe and Marquinhos
We finally found out Messi's salary: he will earn 110 million in 3 years (if he does not leave earlier), he will receive 1 million in the crypt
Man City spends a lot of money to play in their own style. This is not suitable for everyone. Benitez about the Premier League

What Nkrumah said about his birth and birthday in his autobiography

Diana Hamilton out with new single

GIZ to light up 30 CHPS compounds in Afram Plains

Treepz to inject more funds into the transportation sector

Children marriage is a violation of their rights – Director

‘You have failed in life’

Breaking the eight is a must – Yaw Preko to NPP footsoldiers

Government hands over seized rosewood to Trustees of the National Cathedral

I was raped several times

Food shortage is far from us

MMDCEs appointment not a do or die affair – Gabby Otchere-Darko

Love is never unconditional, not even with God – Uncle Ebo Whyte

How to circumvent the deceitfulness of cyber scams

EXPLAINER: How to circumvent the deceitfulness of cyber scams

‘Kaba and slit’ doesn’t make you a Christian – Mary Agyemang

Emmy Awards: How to watch, what to expect

Ghana generated over US$6.5 billion in oil revenue in 10 years

Ghana generated over US$6.5 billion in oil revenue in 10 years - PIAC report

I can’t reveal who is behind my illness

We are not accepting applications for postgraduate – GETFund

Delay’s Style Of Interview Should Be Taught In Journalism Schools

This is Dr. Likee’s time – Yaw Dabo disagree’s with LilWin

My illness is caused by ‘Juju’ – Fiifi Gharbin

‘Dr Likee is the biggest star now, his time has come’- Yaw Dabo

Man Utd on ‘right track’ despite financial hit from virus

‘My New Look Was Inspired By God, He Revealed It To Me In A Vision’

I am not ‘moved’ by social media trolls – Florence Obinim