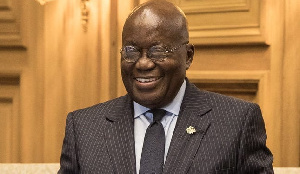 President Nana Addo Dankwa Akufo-Addo has reacted to the Supreme Court judgment on the 2020 election petition.

“On Thursday, 4th March 2021, the Supreme Court, in a unanimous ruling, affirmed my victory in the presidential election of 7th December 2020,” Nana Akufo-Addo who watched the live ruling in his office with his vice, Dr Mahamudu Bawumia posted on Facebook.

The Supreme Court upheld the results of last year’s presidential election, saying the petitioner failed to prove that the winner did not cross the constitutionally required threshold of more than 50 per cent of the votes cast.

The ruling means President Nana Addo Dankwa Akufo-Addo will continue in office as President until his second term is over.

Nana Akufo-Addo polled 51.3 per cent of the valid votes, according to figures from the Electoral Commission while the petitioner, who was the 2020 flag bearer of the National Democratic Congress (NDC), Mr John Mahama, polled 47 per cent.

Delivering the judgment, Chief Justice Anin-Yeboah said: “the petition is dismissed as without merit.”

According to the court, the correction of an error concerning the total number of valid votes cast by the EC Chairperson, Mrs Jean Mensa, was within her mandate and did not affect the will of the people.

Also, the court said Mr Johnson Asiedu Nketia, General Secretary of the NDC and first witness of the petitioner, confirmed admitted in court during his cross-examination that per the EC’s figures, Nana Akufo-Addo crossed the more-than 50 per cent threshold.

The Bench also said no credible evidence was adduced.

This ‘photopreneur’ details how smartphones have disrupted traditional photography

“NAM1 Should Be Jailed And Not Akuapem Poloo”-Showboy Reacts [Video]

“I Will Keep Posting My Bikini Pictures”- Efia Odo Insists

Ramadan: Be assured of our moral support as you intercede for Ghana - NPP Secretary urge Muslims