The Paramount Chief of the Talensi Traditional Area, Tongrana Kugbilsong-Nanlebgtang, has commended President Akufo-Addo and his government for the construction of the Pwalugu Multipurpose Dam and Irrigation Project.

President Akufo-Addo, according to the Paramount Chief, “is the first President to have cut sod for the construction of the multipurpose dam, and for that matter, needs commendation. My people and I cannot thank him enough.”

Speaking at a meeting held on Sunday, 9th August 2020, when the Director General of NADMO together with his officials called on him at his palace in Tongo, Tongrana Kugbilsong-Nanlebgtang said he is grateful to the President for the multipurpose dam because not only will it create employment for the youth in the area, it will also bring to control the perennial problems caused by the spillage of the Bagre Dam. 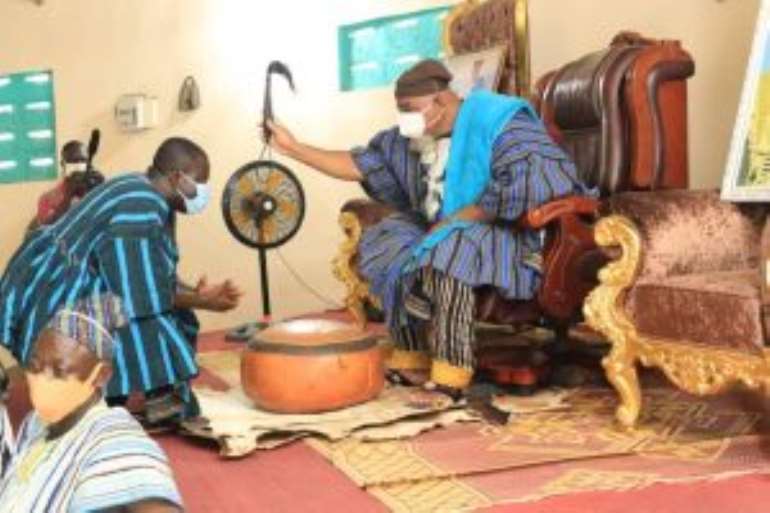 He also lauded the Director General of NADMO, Hon Eric Nana Agyemang Prempeh “for the good work they are doing for mother Ghana especially in the time when the novel COVID19 has taken the centre stage of everything.”

The Director General called on him to respectfully urge his people living near the banks of the black and white Volta Rivers to move to higher grounds.

Ivan Rakitic: We saw how important Neuer is for Bayern
Mueller - the best player of the match for the UEFA super Cup between Bayern Munich and Sevilla
Sevilla have five defeats in matches for the European super Cup. This is an anti-record
Bayern won 4 trophies in a year. To repeat Barca's record, you need to take two more
Stefano Pioli: we Must pay tribute to Çalhanoğlu. He can become a key player in Milan
Flick won the fourth trophy of his coaching career
Bayern won the UEFA super Cup for the second time
Source https://www.modernghana.com/news/1022079/my-people-and-i-cant-thank-you-enough-for-pwalugu.html

November to get busy as Ghana Premier league resumes

Policeman, two others remanded over murder of taxi driver

No Need To Withhold Nurses’ Salaries After Suspension Of Strike – NLC

Traders At Okaikwei Demand Head Of MCE Over Destruction Of Goods, Military Assault

Charles Bissue Vs Mireku Duker: The inside story

I fell in love with Mahama but… Ken Agyapong

‘You Make Me Feel Loved’

The NDC Is The Only Party To Resurrect The Creative Industry

We’ll not accept results of a flawed election – Mahama

Koku Anyidoho in a lovely pose with Kufuor

‘My Sons Said If The Woman Is Not Like You, We Are Not Marrying Them’

I Have Created Employment In Ghana

“Negative comments about my father do hurt me” – Farida Mahama » ™

I met my biological father for the first time in 2012

How Ghanaians are reacting to Rawlings’ mother’s death

Chief shot dead, three others in critical condition over land

You can’t judge me because you broke my virginity