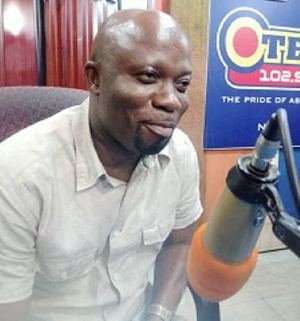 To him, the Ahafo Region is not going to fight for slots in these portfolios as they believe the President will appoint competent people across board to support his vision for the country.

When asked if the President had made any ministerial appointment from the Ahafo Region, Owusu Sekyere responded in the affirmative.

“For now, we have one person and that is the MP for Tano North Constituency, Freda Prempeh. She is the Minister for Works and Housing”.

The Ahafo Regional Chair who through the combined efforts of his executives and party loyalists managed to maintain the party’s 4 seats in the region furthered, said there are a lot of competent people qualified for the various portfolios in government.

“Nana knows the competent people and he will obviously give the Ahafo Region all we deserve”, he stated.

Addressing Happy98.9FM’s Don Kwabena Prah on the Epa Hoa Daben political talk show, Kwabena Owusu Sekyere who is sure the region will receive its fair share of appointments mentioned, “The President has not nominated Deputy Regional Ministers and CEOs and I believe he will give us what we deserve”.

He however clarified that the interest of the party comes first in such matters and advised his colleagues from interfering in the President’s work.

President Nana Akufo-Addo has made about 46 appointments as Ministers of his new government. These names after vetting have been approved by Parliament.

Presently, the country awaits the President’s 2nd series of appointments which will include Deputy Ministers and Heads of Institutions.

Neymar on contract extension: Happy to stay at PSG. I will try to fulfill our main dream - to win the Champions League
Neymar has extended his contract with PSG until 2025
Zidane on Hazard laughing after Chelsea: Eden apologized, he didn't mean to offend anyone. This is in the past
Juventus refused to sell de Ligt to Chelsea and Barca. The offers came about 10 days ago
Real Madrid, Barcelona and Juve sent letters to 7 Super League clubs and threaten them with legal consequences for withdrawing from the tournament
Julen Lopetegui: Zidane is the perfect coach for Real Madrid. His work speaks for itself
Hazard will be hard to convince to leave Real Madrid. He receives 15 million euros, his contract is valid for another 3 years