Nasiru Mohammed scores his first league goal of the season 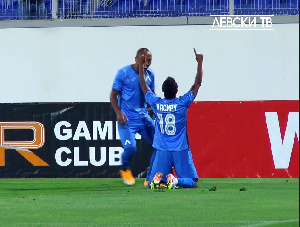 Levski Sofia striker Nasiru Mohammed scored his first league goal of the season on Saturday in their 3-0 win over CSKA 1948 Sofia at home.

The former Ghana U17 captain registered the go-ahead goal in the sixth minute at the Vivacom Arena - Georgi Asparuhov in Sofia.

Mohammed was replaced in the 88th minute by Marin Petkov.

He was making his fourth league appearance for Levski Sofia and that could be a huge motivation to do more.

Mohammed struggled to adapt to life last season when he joined from Swedish side BK Hacken.

He managed to score one goal in 11 league appearances.

Manchester United are ready to offer Chalhanoglu a 5-year contract. In the summer he becomes a free agent
Ceferin made it clear that we are categorically against it. UEFA on Bartomeu's words about the European super League
Pep on the criticism: Defeat is becoming a disaster these days because of social media. Sometimes the opponent is better than us, this is life
FIFA about Bartomeu's words about the European super League: we do not know about any agreement
Brother, don't give up on him. He's playing against us. Benzema asked Mendy not to give the ball to Vinicius at half-time of the match with Borussia
In 2010, Pirlo negotiated with Barca. The main playmaker of the generation was ready to go to Pep even in the rotation
Chugainov about Loko in the Champions League: there are Chances to get out of the group. The team looks confident and worthy
Source https://www.ghanaweb.com/GhanaHomePage/NewsArchive/Nasiru-Mohammed-scores-his-first-league-goal-of-the-season-1064857

I can’t be a gospel musician because of fornication

I wish to undergo liposuction to get large hips

MzVee shares ‘untold’ story of her life ahead of big day

I can never be a gospel musician

Ibrah One Slams Nana Addo, Says No Matter How Many Sods He Cuts He Will Still Lose The Election

‘I Just Can’t Wait To Walk Down The Aisle Again’

Why we are yet to call of strike: ASUU

AfCFTA: Exporters advised to rely on the NEDS to stay ahead of competition

National Export Development Strategy to rake in $25.3 billion in annual NTEs by 2029

Officials Who Hid COVID-19 Palliatives Came To Me To Look For Buyers: Galadinma

“I Can’t Remember The Last Time I Had Sex”

Nigeria covering up the massacre of #EndSARS protesters at Lekki, says Amnesty International

Finance Minister to present budget for first quarter of 2021 today

GFA hold successful meeting with clubs ahead of league start

At this bookstore, visitors shop in the dark [Photos]

Watch Frimpong's 'horror' tackle on an opponent in Hungary

Communications Ministry explains why AirtelTigo shares were acquired by govt

We can’t do away with fake news - National Media Commission

Alhassan Andani retires next month after 14 years at Stanbic Bank

NPP can only win Greater Accra through violence – Ade Coker

NPP inherited growth from NDC but could not sustain it – Mahama