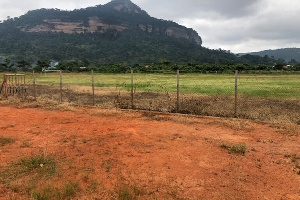 A cross-section of the current nature of the stadium

Work will soon commence on the Nkawkaw sports stadium in the Kwahu West Municipal Assembly of the Eastern Region, Agoo News has gathered.

The Nkawkaw Sports Stadium became the most topical issue in the country when the Deputy CEO for the Middle Belt Development Authority Joyce Opoku Boateng announced her intention to seek fund from her office to fix it.

In November 2019, starrfm.com.gh in a publication revealed a manifesto promise to develop the park by the then aspirant of the Nkawkaw Constituency Madam Joyce Opoku Boateng during the ruling New Patriotic Party’s Primaries.

According to her, sports is a vehicle for development and for that matter will ensure the Nkawkaw sports stadium is transformed into a super modern sports complex.

The stadium which holds 5,000 people is in a poor state although it’s one of the largest parks in the Eastern Region also the home to Okwahu United Football club.

The stadium is used mostly for football matches and many other sporting events including inter-school competition in Kwahu and its surrounding communities.

The Nkawkaw sports stadium also serves as a destination during the Kwahu Easter Paragliding festival where pilots alit. Sports fans have on several occasions expressed worry over the current state of the stadium, despite several appeals to ensure the park is fixed; no improvement has yet been recorded.

In September this year, the Minister of Youth and Sports, Isaac Kwame Asiamah cut sod for the reconstruction of the Nkawkaw Sports Stadium located in the Eastern Region.

At the sod-cutting ceremony for the edifice which is to be constructed at Ata Ne Ata, a community located in the picturesque shadows of the Odweanoma mountain at Nkawkaw, Mr Asiamah said it will be reconstructed into a stadium complex after over 25 years of neglect.

Mr Asiamah disclosed that upon completion, the facility which is being funded by the Middle Belt Development Authority would be used to host international sports competitions including football matches of the Black Stars.

He also urged all residents of Nkawkaw to guard the project jealously by preventing nation-wreckers from stealing building equipment and encroaching on the site.

In his address, the CEO of the Middle Belt Development Authority, Mr Joe Danquah said the facility would be constructed by Farhadel Company Limited at a total cost of GH?27million.

Urging the residents of the area to vote massively for President Akufo-Addo if they want the project to be completed, he said the first phase which includes the reconstruction of the football stadium would cost GH?14million while the second phase would cost GH?13million.

In other words, some people have raised concerns over delay by the contractor to begin work after the sod cutting ceremony was held which saw the presence of Kwahu Gyaasehene and Atibie Chief Barimah Kwame Asante Betiani II who represented Kwahuhene Daasebre Akuamoah Agyapong II

At the site today, a consultant of Skol Company Ltd Mr Arnold Odei who together with the Eastern Regional Director of Middle Belt Development Authority Mr Arimeyaw Alhassan Alolo and other officials in a short survey reveal the next action on the project.

Addressing the media today, Mr Arnold Odei said work will begin on Monday adding the contractor is on a mobilization stage. Currently, the contractor is on a mobilization stage meaning he is making the necessary preparation so as you can see, he has stated the demolishing exercise, transporting all the materials to site, all equipment will soon be moved here after fixing structure for the workers.

Meanwhile, The Minister of Youth and Sports, Mr Isaac Kwame Asiamah, has attributed the delay in the reconstruction of the Nkawkaw Sports Stadium to the redesigning of the multi-purpose edifice.

Initially, the stadium was carved out to accommodate only 5,000 fans, but upon further consultations, we decided to increase the capacity to 8,000 – hence the delay,” he told the Times Sports on Tuesday.

He said the stadium design had to be reviewed as well to have a place for more sport disciplines, aside football.

According to the Sports Minister, the challenges have been dealt with and workers are now back on-site “to start the ball rolling. As we speak now, the coast is clear and work has begun this week.”

The Nkawkaw stadium, which is being funded by the Middle Belt Development Authority (MBDA), will have a FIFA-standard football pitch, a multi-purpose court for more than 16 sport disciplines, an IAAF standard track, hostels and a restaurant.

Ferencvaros defender: Ronaldo waved me off when I asked for his shirt. Maybe it's because he didn't score for us
Klopp on firmino: the Team is an orchestra, and Bobby plays 12 instruments in It. He is important to us
Antonio Conte: I Don't think Real Madrid can cry about their losses. It's funny that the media write about their problems with the squad
Lewandowski on the cancellation Of the Golden ball: it's not that important. Such prizes are something extra
Salah can play with Atalanta. He became ill with the coronavirus
Klopp on injured: no News. I have no idea who will play for Atalanta. Why should we give them information?
Barcelona are thinking about signing Garay due to Pique's injury
Source https://www.ghanaweb.com/GhanaHomePage/SportsArchive/Nkawkaw-stadium-redevelopment-Contractor-to-begin-work-Monday-1091974

There’s no difference between some politicians and armed robbers

Mahama enskinned as King of Development

I can easily die for Rev Obofour and his wife, Queen Ciara– Ayisha Modi

Dumsor Looms As IPPs Vex Deputy Minister For Accusing Them Of Politics Despite $1.44 Billion Debt Owed Them

Fugitive Prophet Bushiri will not get fair trial in SA, says Andile Mngxitama

Pope Francis: I know first-hand what COVID patients are going through

21 Savage in mourning after brother stabbed to death in London

At least one drowned, several missing in attempt to reach Greece

Vote Akufo-Addo; His Ambulance Was There For Me When I Had An Accident – Samini

Akufo-Addo To Opens Phase One Of Obetsebi Lamptey Interchange Today

Funny Face Again, Says He Had Intercourse With His Former Wife Recently » ™

‘Being Divorced Is Nothing To Shame Anyone For’

Now ‘real hope’ to end Covid-19 with vaccines: WHO chief

I Will Build 21 Universities If Elected Governor – Godwin Maduka

Man wrestles puppy from alligator’s jaws without dropping his cigar

Another Guy Outsmarted With The ‘Circle’ Move, Takes Home Soap As A Phone » ™

If We Keep Our Promises, APC Will Retain Power In 2023

Russell Tovey was told being openly gay would ‘hinder’ his career