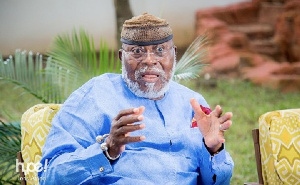 Founding member of the New Patriotic Party (NPP), Dr Nyaho Nyaho Tamakloe has said that all other leaders after Kwame Nkrumah failed to live up to the standards the first President set.

The statesman believes that Kwame Nkrumah was the only visionary leader that the country has had.

Explaining his stance on visionary leadership of the country, Dr.Nyaho Nyaho Tamakloe told Samuel Eshun on e.TV Ghana’s ‘Fact Sheet’ show: “After Kwame Nkrumah, I personally don’t believe we have had any leader with a vision. If we have had, things will not be the way they are now. It is clear to see. The founder of the nation had a programme and he made sure he followed the programme carefully”.

Following his statement, Samuel Eshun questioned why the Statesman did not effect any change considering the fact that he was in a position of leadership under President Kuffour’s Government.

However, Dr. Nyaho Nyaho Tamakloe was quick to note that sometimes, when one is in certain positions “you decide not to talk again”.

Dr. Nyaho Nyaho Tamakloe posited that as far as this nation is concerned, he is interested in the next generation and not the next election.

Meanwhile, the founding member of the NPP has said it was rather unfortunate the first President of Ghana, Kwame Nkrumah was not able to achieve everything he wanted. For him, if the achievements of Kwame Nkrumah were realized, Ghana would have been far better than it is now.

Cheating is something that comes with being a man

Editorial: Time to stop criminals in their tracks!

“You Are Insulting A Mother Like Me,” Tonto Dikeh Slams Trolls