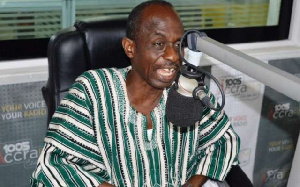 The General Secretary of the opposition National Democratic Congress(NDC) Johnson Asiedu Nketia has asked members of the governing New Patriotic Party to stop berating the Executive Secretary of the National Identification Authority(NIA) Prof. Ken Attafuah over claims that no NPP loyalist will be employed at the NIA.

Professor Attafuah in an interview with Angel FM is reported to have said in Twi that President Nana Addo Dankwa Akufo-Addo has charged him to ensure that no party executives are hired in the process at the National Identification Authority (NIA).

Professor Attafuah added that the president’s vision is for him to build a neutral public service and so he [Attafuah] was doing what the law permits and in line with the President’s legacy.

His comment has attracted condemnation from NPP party members and some footsoldiers who have described Prof. Attafuah as insensitive.

In a Facebook post, Gabby Otchere Darko who is also the President’s cousin called on Prof. Attafuah to apologise for his comments. He added that the NIA boss could have phrased his comments more intelligently.

But commenting on the issue in an interview on Okay FM monitored by Kasapafmonline.com Thursday, Mr Asiedu Nketia stated the NPP rather than attacking Prof. Attafuah must commend him for at least appearing to be principled.

“What crime has Prof. Attafuah committed for saying that President Akufo-Addo has asked him not to be partisan in employing people at NIA? Bigwigs within the party who ought to know better and commend Prof. Attafuah even if he’s paying lip service to this principle are rather descending on him. Whether he’ll act on what the President has told him or not is another matter but just saying he’ll not populate NIA with party people is worth commending.

“Why should Prof. Attafuah be asked to apologize, apologize to who? apologize because NIA is NPP headquarters or NPP private business?”

AHF: Six Reasons Why WHO Chief Should Go

Will you also refer Tsatsu to the GLC as you did against Ayine? – Kwaku Azar to CJ

Armah-Kofi Buah wants responsibility to be laid where it belongs

GPGC judgement debt: Armah-Kofi Buah wants responsibility to be laid where it belongs

$170m judgment debt was for wrongful termination, not signing – Donkor to Dame

Minority walks out of debate on four deputy ministerial nominees

If Witches Existed, I Would Have Been Dead A Long Time Because I Run My Mouth More Than Anyone, Just Hustle And You’ll Make It

I ‘mellowed’ for Efya to rise to fame- Nana Adwoa Awindor

EL Is Our Godfather, We Planning Of Working With Him Again- Dope Nation On Their Relationship With EL

My Love For Her Simplicity And Decency Is Unmatched

We Are Never Breaking Up As A Musical Duo- Dope Nation

Songwriter of the Year is for me, hands down – Kofi Kinaata

We Are Always Fighting Each Other- The Dope Nation Brothers

The KNUST alumnus who designed the VGMA plaque

We Are Yet To Work With Artists From Takoradi- Dope Nation

Euro 2020: France top group as Portugal go through with draw