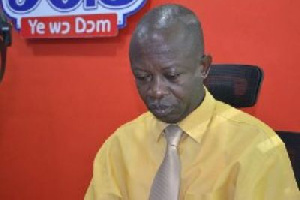 Political Science Lecturer at the Kwame Nkrumah University of Science and Technology(KNUST) Dr. Amakye Boateng says it would not be fair for anyone to criticise the NPP for being dominated by the Akan ethnic group.

The learned lecturer explained that the New Patriotic Party (NPP) having majority of its members from the Akan ethnic group and also dominating is by “default” hence there is nothing people can do about that.

Earlier, Majority Leader in Parliament and Minister for Parliamentary Affairs Mr. Kyei Mensah Bonsu speaking in an interview with Accra-based Joy Fm, said: “Inwardly, I know also have the competence but is it wise for me now immediately after two Akans; Kufuor had been the president, Akufo-Addo follows from the Eastern Region and there is a third Akan to follow? Doing introspection, I think it may not hold well for a party that is accused by some as being overly Akanistic party. But not everybody agrees with me. And that is the beauty of democracy.”

However, commenting on the statement by the Majority Leader on Kumasi-based Pure FM in a studio discussion monitored by MyNewsGh.com, Dr. Amakye Boakye stressed that Akans dominating the politics of the NPP is by default.

“If anybody attacks the NPP for being a part of the Akan, such a person is also practising politics with ethnicity”, Dr. Amakye told Kwame Adinkrah the host of the show “Pure Morning Drive” monitored by MyNewsGH.com.

He continued to explain that, “If the NPP has 100 voters and it happens that Akans are 70, then it’s nobody’s fault…and of course they will elect their Akan brother to lead. So why then do you say otherwise?”

To him, having Akan majority in the NPP is by default and not the making of any individuals.

Meanwhile, Mr. Kyei Mensah Bonsu has said he has received unprintable insults over his non-Akan comment.

What are people saying?

Executive Director of Media Foundation for West Africa Mr. Sulemana Braimah has said Kyei Mensah Bonsu is only thinking of how NPP will win the 2024 general elections and not the development of the country.

A Founding Member of the New Patriotic Party Dr. Nyaho-Nyaho Tamakloe also scolded My Osei Kyei Mensah Bonsu describing him as “undemocratic” and called for his resignation.

A group calling itself concerned Northern Grassroots of the NPP is calling on the Majority Leader to resign from his position over his own comment.

Arsenal management still supports Arteta, although disappointed with the end of the season
Espanyol relegated to La Liga
Inter have won 14 consecutive Serie A home games. This is a club record
Chelsea extended their unbeaten streak to 7 matches. Next - the game with Arsenal
Raheem Sterling: I had an obvious penalty. I do not know why it was not set
Real Madrid have a chance to become the leader of La Liga-thanks to Barca's perfect zeros with Atletico Madrid
Thomas Tuchel: If City had scored a penalty , there would have been no chance of a comeback. Shocked by Chelsea's reaction

GJA president dragged to court over alleged over-stay in office

Your work is not enough – #FixTheCountry Movement organisers to Bawumia

Watch highlights of Great Olympics' win against WAFA in Sogakope