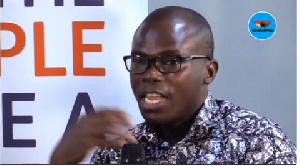 The Executive Director for Media Foundation for West Africa (MFWA) has described the two major political parties in Ghana as having the same stance on corruption.

According to Sulemana Braimah, the two parties; the National Democratic Congress and the New Patriotic Party are only good at “debating about who is more corrupt.”

In a tweet posted on Saturday, October 24, 2020, Sulemana Braimah said a day of reckoning will soon come to expose the two parties on their stance about corruption.

“On corruption, NPP and NDC are the same. They just debate about who is more corrupt. We will soon be exposing all,” the tweet read.

To fulfil a 2016 campaign promise, the Akufo-Addo led administration set up the Office of the Special Prosecutor to combat corruption.

Martin Amidu was sworn in as Ghana’s first Special Prosecutor on February 23, 2018 after he received unanimous approval from Parliament.

The office is mandate to investigate and prosecute cases of alleged corruption under the Public Procurement Act 203 Act 63 and other corruption-related offences implicating public officers, political office holders and their accomplices in the public sector.

But since the Office was set up, it has been accused of being less proactive in probing corruption related matters in the public sector.

On corruption, NPP and NDC are the same. They just debate about who is more corrupt. We will soon be exposing all.

Pirlo about 2:1 with Ferencvaros: I expected more, but it was a difficult game against a closed opponent
Napoli has not paid salaries since July. The club plans to pay off its debts in December (RAI)
Schalke terminated the contract with Ibisevic and suspended Bentaleb and Harit
Bielsa, flick, Klopp, Lopetegui and Zidane are the contenders for the best coach of the year award
Messi, Ronaldo, Lewandowski, Ramos, de Bruyne and 4 Liverpool players are among the contenders for the best
Zlatan about getting the Swedish Golden ball: I Plan to win it in 50 years
Anton Ferdinand was racially abused in comments to a post about a documentary about racism and Terry
Source https://www.ghanaweb.com/GhanaHomePage/NewsArchive/NPP-and-NDC-have-the-same-stance-on-corruption-Sulemana-Braimah-1092040

No Krobo harassed by Akyems under my government, ignore propaganda - Akufo-Addo

CPP to revive over 50 collapsed factories for job creation

We don’t want an ‘Akonfem’ govt to return - Kwakye Darfour

“She would have been my spec even when I was 10” – Banky W says as he shares photos of his wife, Adesua, as a girl

‘Pose For Africa’ to create opportunities for female models

Still Leading As Number ONE In Africa, You Can’t Take My Throne -Bobrisky Slams Upcoming Cross-dressers

Demand for international flights picking up after coronavirus setback - Report

“If a woman loves you, she treats you like her son” – Dzifa Sweetness » ™

Mahama grateful to Bongo for the unflinching support

Don Jazzy To Celebrate His 38th Birthday With 20 Fans

No country has industrialised without nuclear energy - Energy experts