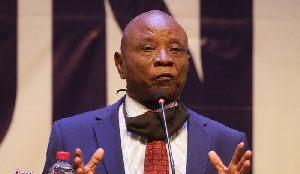 According to Mr. Ebo Morgan, these two major parties are responsible for ruining this country and they only repeat promises made to the people of Ghana in every political season and as such we should do away with them in this year’s election. In a Presidential debate on JoyNews monitored by GhanaCrusader he said

“We need to change this establishment parties that have caused all Our woes. They have no new ideas, they just kept recycling what they presented in 1992”.

The Independent Candidate stated clearly that he has not witnessed any new ideas by the two major parties in the country and as such he is running for the Presidency, in order to give Ghanaians alternatives which will benefit the country.

“I have not seen any new evidence. I’m here to present an alternative which I think you all will be happy with me and Ghanaians will give me the nod to lead the country”.

PSG can sign Khedira from Juventus
Ruediger may leave Chelsea. He wants to play regularly before the Euro
Tiago Silva: I am motivated by the chance to play at the 2022 world Cup. I will be about 38, I want to be fit
Arsenal announced the transfer of goalkeeper Runarsson from Dijon
Juve will pay 9 million euros for the loan of Morata, the agreement can be extended for a year
Chelsea will pay 24+6 million euros for goalkeeper Renn Mendy. Deal closed
Tiago Silva: At 35, players leave the Premier League, and I'm just starting out. This is the most difficult League
Source https://www.ghanaweb.com/GhanaHomePage/NewsArchive/NPP-NDC-have-no-new-ideas-Carl-Ebo-Morgan-1033474

Nurses strike: Patients at Sandema hospital left to their fate

#BBNaija: I don’t want to be in a relationship with Neo again – Vee

NPP youth urged to be focused in their campaign

The stable economy I left for Akufo-Addo is shrinking – Mahama

I was not afraid to come up against Ronaldo, Ronaldinho, others in 2006 - John Painstil

#BBNaija: Nigerians predict winner, runners-up in the finale of season 5 next week Sunday

Testing passengers for coronavirus at the airport pays off - President

Males must be active in bridging gender equality gap

MCE honoured for being responsive to tourism-related development

A tale of Kwame Nkrumah, Ohene Djan and Real Republikans

Sons of the super-rich, popular & influential Ghanaian businessmen – A discovery

Selection Of Schools Into SHSs Begins

Next NDC government will restore dignity of teachers - Dr. Apaak

Kassim Adams named in Bundesliga team of the week

We want to stay on top of the league - Jeremie Frimpong

Arsenal aim to do a Torreira-Partey swap deal

Use of Abusive Language on Radio: NPP’s Chairman Wontumi Tops the Month of August

We are looking forward to the Europa league - Jeremie Frimpong

Kwadwo Asamoah linked with a move to Sampdoria

Kantanka to ‘adopt’ JHS graduate who built his own car

‘I Love My Fans’, Wizkid Says

#BBNaija: He is a definition of GRACE – Media users react as Trikytee has been Evicted from the Lockdown House