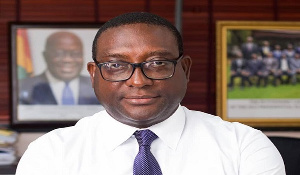 Incumbent Member of Parliament for Adenta Yaw Buaben Asamoa says he is not afraid of the contest in the upcoming primaries of the New Patriotic Party (NPP) despite suggestions he was going to be defeated.

The private legal practitioner in an interview on Frontline on Rainbow Radio 87.5fm said he has done his best and was hopeful delegates will re-elect him to represent the party.

The MP said just like every contest, people will express interest but as a candidate, he is not surprised he is being contested.

He admonished delegates and party supporters to be guided by the fact that the party wants victory in the upcoming presidential and parliamentary elections.

The NPP he stated will win the race but it will take unity for them to do so.

According to her, delegates of the party have had challenges with the lawyer’s handling of the party’s communications since he assumed the role.

But the incumbent MP says he is not scared of the contest.

Joleon Lescott: Messi and Ronaldo are super freaks! Sterling follows them
Maurizio Sarri: Now is not the time to think about Lyon. Atalanta is very good, it is difficult to play against them
De Bruyne has no intention of leaving Manchester City, even if the club is banned from the Champions League
Zlatan on Rangnick in Milan: I don't even know who it is
Abraham fulfilled the conditions for an automatic extension of his contract with Chelsea until 2023
Barca presidential candidate Font said that Xavi will lead the club if elected: we can't count on Setien in the future
Alli will not play against Arsenal due to injury
Source https://www.ghanaweb.com/GhanaHomePage/NewsArchive/NPP-Primaries-I-m-not-scared-of-competition-Buaben-Asamoah-983875

Man, 24, beaten to pulp by mob for allegedly stealing wee

My cousin told me he’d kill me for being gay

This What Joey B Planned To Give Sarkodie As A Birthday Gift, It Is Quite Unimaginable » ™

‘Medikal Is Richer Than Shatta Wale’

Counsellor Lutterodt Reveals What Motivates Him To Make Some Weird Utterances

SSNIT asked to pay right past credits to retirees

Stonebwoy & His Wife, Louisa Organize Free Training Workshop For His Fans At Ashiaman

Asset managers urged to leverage on opportunities presented by coronavirus

Coronavirus: Spare us the protocols, only way out is to limit human mobility - Kwesi Pratt to govt

Coronavirus: WHO rethinking how COVID-19 spreads in air

BEEF ALERT!!! ‘If I Had The Power, I Would Have Deleted Akuapem Poloo From Instagram’

Transport Ministry should ensure its directives are complied with - Duncan Amoah

Nigeria Was Not Created To Work, Samklef Says

Church Deaconess Tortures Girl Left In Her Care; Forces Her To Sleep On Toilet Floor

EPL: Gay Premier League player admits he is afraid to come out

Ghanaians urged to be responsible in their actions

Aspiring MP arrested for organizing rally, but chief jumps to his defence

All the men attacking Opoku-Agyemang have mental dysfunction – KSM

Why I will partner Akua Donkor – Adakabre speaks