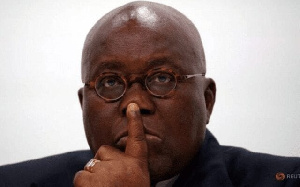 Political analyst, Michael Ebo Amoah has cautioned the governing New Patriotic Party (NPP) against acts that could easily send them to opposition.

He said the party should not allow power to eat into their heads since it is a recipe to send them into opposition.

The analyst said the break the 8 agenda being pursued by the party will be a mirage if they don’t take steps to address concerns raised by Ghanaians.

He explained that the government must take into consideration the issues raised by #FixTheCountry campaign and address them.

Mr. Michael Ebo Amoah told Kwabena Agyapong on Rainbow Radio 87.5Fm that we have seen powerful persons who are today, no longer relevant in Ghana’s politics hence political leaders should not abuse office when they come into office.

The lecturer advised the NPP to tread cautiously and stop using brute force in intimidating people since that could affect their fortunes in 2024.

He is also wondering why young politicians have failed to learn from the past adding, those the gods want to destroy first make them mad and I believe they will learn lessons from the past.

“I appeal to the NPP; they have three years ahead of them. I have been wondering why the government has become unpopular? That should tell you that the people are not happy and the government must address the concerns. Sometimes it is not about the president or the vice but the appointees. The indiscipline some of them are exhibiting is not the best. They want to break the 8 but they should be careful because when the people are agitated, you will suffer the consequences. Don’t undermine the campaign, meet them half way and speak to them. I am not also surprised some top ministers have met them. What is happening today happened to Mahama and so, the NPP should be careful”, he suggested.

He said the NPP was lucky they have three years ahead to address the issues.

He asked Ghanaians some time to settle down but stressed on the need for the government to mend their ways and satisfy the needs of Ghanaians.