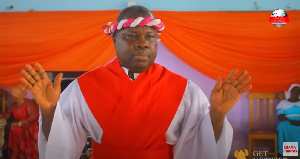 The General Overseer of the Church of Rabbi, Prophet Kwabena Tewiah has warned the Nana Addo Dankwa Akufo-Addo government to redeem the faith Ghanaians placed in it lest the New Patriotic Party risks going into opposition for three decades.

Speaking in a recent media interaction, Prophet Tewiah averred that such a predicament will befall the party as a result of the disappointment Ghanaians have seen having given the party two terms in power.

“If the NPP does not stand firm, they will go into opposition for 30 years, they won’t be able to come back to power. We kept our fate in them but they have disappointed us, they should see the number of young Ghanaian men and woman who are unemployed, children walking the streets.”

According to Prophet Tewiah, he personally ensured President Akufo-Addo won power in 2016 and worked again for his victory spiritually in 2020 but noted that the president has become adamant in heeding to the plight and realities in the country as a result of some selfish individuals within the corridors of government who are spiritually manipulating the president.

“They have sent him to the high gods of Ada, Krobo, Akuse, Jamani, Togo, Dahomey and four towns in India. These cultists have tied him up to make sure he is unable to speak so they can have their chance to steal the nation’s money. Now the stealing is rampant among some NPP members at the Jubilee House, Tema Habour and at the Oil Fields where Ghana’s fuel is drilled. The president would’ve been able to stop it and ensure the money is put to good use but he has been tied up,” he added.

The leader of the Church of Rabbi stated that he started his spiritual work for the president as far back as 2004, with the knowledge and the blessing of the president but over the last few years, the President seems to have neglected him and his directions all being a result of the workings of some people close to the president.

“I am not a cheat and neither a false prophet. The president entrusted the nation into my hands and I have delivered. I was in his office on a Friday and a Sunday, we had a lot of discussions (before the election). But because of the cultists, the man has even forgotten he gave me work to do. I am grateful because I was able to finish my work and don’t have anything else to say,” he stated.

REGSEC to give GSS Field Officers in Ashanti protection

Approval of 4 deputy ministers was constitutional despite minority’s boycott

Sars to close its tax branches temporarily for visits

Buhari Embarks On Second Medical Trip To London — In 4 Months

Priest in Athens throws acid at bishops after disciplinary hearing

Job creation in Ghana, the role of e-commerce

2021 PHC: What Ghanaians Should Expect During Enumeration

Education is a critical element in nation building - Mireku Duker

German exports to non-EU countries grow 27.9 percent in May

Pakistan: Global bodies should decide which Covid jabs are accepted

Britain to ditch orders to wear face masks on July 19

North Korea shoots down US offer for talks without preconditions

NDC presser is ‘just to throw mud at Chief Justice’

Thomas Tuchel warns Chelsea top four is ‘not done yet’

De Klerk ’doing fine’ despite having cancer, his foundation maintains

UEFA Scraps Away Goals Rule In All European Club Competitions