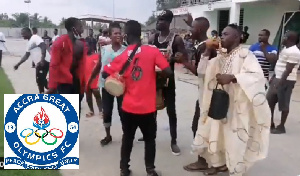 The two sides played out a goalless draw

Beyond the pitch, Olympics has usually pursued opponents onto social media, thanks to the person manning their official Twitter handle.

This week, the admin’s salvo was directed at Karela FC after the two sides played out a goalless draw on Saturday (January 23) in their match day 10 fixture at the Accra Sports Stadium.

By virtue of being top of the league, Karela tweeted a video of its fans in celebratory mood with accompanying text: “Top of the league log dance...Chai..Accra Great Olympics, abi you dey shake?....You are next...!!!!”

The Oly admin quoted Karela’s January 17 video after Saturday's draw and wrote: “Waste of dance & energy. Next time, mask up at least.” The response received humorous reactions on the micro-blogging platform.

The 'dade boys' were hoping to close the gap between the two sides with a win. New coach Yaw Preko made changes to his squad to improve his side's chances upfront but Karela United were resolute in defence.

Olympics star man Gladson Awako was well policed throughout the game. Coach Yaw Preko is yet to taste defeat since taking over the job from Coach Annor Walker in the ongoing season.

Next time, mask up at least https://t.co/qb6nEKkIsR

Everton have extended their contract with Ding until 2025
Stefano Pioli: After the Inter game, I told the team that there are 90 days left until the end of the season. They will decide everything
Jota returned to the Liverpool general group
Mascherano on Messi's future: He would never have dared to give Leo advice. As a friend, I will support any decision he makes
Claudio Marchisio: Ronaldo always inspires fear. With the exception of penalties from 25 meters
Jaka about insults in social networks: It's killing football. I would like to meet with those who write all this, and ask: Why?
Ajax wants to extend the contract with Onan, despite the suspension
Source https://www.ghanaweb.com/GhanaHomePage/SportsArchive/Olympics-Twitter-admin-mocks-Karela-for-waste-of-dance-amp-energy-1162537

Farmer allegedly murders okada rider and buries him in a farm

[Photos] How security officials locked up LGBTQI office in Accra