Only Mahama can win power for NDC – Party advised 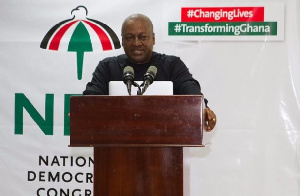 The Editor of the Ghanaian Publisher, Yaw Obeng Manu has said that the NDC’s strongest bid to reckon power is the former President, John Dramani Mahama.

He advised that now is the time for the party to deal with its limitations and that of the flagbearer.

On Editor’s Take on Happy Morning Show, he shared with host Samuel Eshun: “Whether you like it or not, if the NDC will win power as soon as possible, then it depends on John Dramani Mahama. So, the best they can do is to begin to ask themselves that, ‘what can we do to repackage ourselves and our candidate?

What can we do to make sure that the limitations of our candidate are dealt with?’”

Over the weekend, former Deputy General Secretary of the National Democratic Congress (NDC), Koku Anyidoho stated that his loyalty to late President John Evans Atta Mills is the reason he is allegedly hated by John Dramani Mahama.

In a series of posts on Twitter, the outspoken politician also questioned why the 2020 Presidential Candidate of the NDC hated President Atta-Mills despite being his vice.

Mr. Samuel Koku Anyidoho who was recently suspended for breach of the NDC constitution said he had more questions for John Dramani Mahama and ready to get the answers.

Chelsea extended their unbeaten streak to 7 matches. Next - the game with Arsenal
Raheem Sterling: I had an obvious penalty. I do not know why it was not set
Real Madrid have a chance to become the leader of La Liga-thanks to Barca's perfect zeros with Atletico Madrid
Thomas Tuchel: If City had scored a penalty , there would have been no chance of a comeback. Shocked by Chelsea's reaction
Busquets was diagnosed with a fractured upper jaw
Tuchel has two consecutive wins over Guardiola. Champions League Final - May 29
Arsenal did not make the top 4 of the Premier League for the fifth year in a row. The last time the club was in the top four was under Wenger