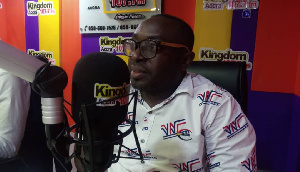 According to him, the Minister failed to do thoroughly and proper research before coming about with such utterances.

Opeele Boateng said metropolitan, municipal and district assemblies (MMDAs) to strictly enforce their bye-laws on sanitation to check the impunity with which people abuse the system.

“I don’t understand his bases for saying Accra is 85% clean, maybe she doesn’t go to route areas in Accra that is why she is saying that but what I see is that she did poor research on sanitation without any facts,’’ Isaac Opeele Boateng told ‘Kwaku Owusu Adjei on ‘Pae Mu Ka’ on Accra-based Kingdom FM 107.7

According to him, in spite of having a ministry dedicated to sanitation, Ghana’s capital Accra remains dirty. He blamed successive governments for poor sanitation problems within the country.

His comments come on the heels of a huge public outcry about the state of sanitation in the country’s cities, against the backdrop of saying government’s promise to make Accra the cleanest city in Africa by 2020 is 85% complete.

The Sanitation and Water Resources Ministry was created in January 2017 to provide the needed support to the sanitation and water sectors across the country.

Inter have moved closer to Juve, but are unlikely to win Serie A. There are problems with the defense and Conte's system
Sane will miss about two weeks due to a knee injury
Rostov will reject the offer of Genoa for Shomurodov, as they want more than 8 million euros (SE)
Mendes earned about 20 million euros during the summer transfer window
Carragher on Arsenal: Liverpool are a few years ahead, but Arteta can take them to the Champions League
Roma is the favorite in the fight for Jovic. Real Madrid have offers from Inter and Milan
Ruben Dias has arrived in Manchester to complete his move to city
Source https://www.ghanaweb.com/GhanaHomePage/NewsArchive/Opeele-Boateng-jabs-Sanitation-Minister-over-Accra-is-85-clean-comment-1033444

Kwame Baah set to remain Asante Kotoko No.1 for next season

'We have the ability to fix voter roll anomalies' – Jean Mensa