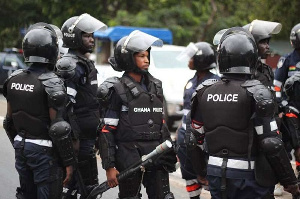 Some personnel of the Ghana Police Service

The National Election Security Taskforce has marked some 635 hotspots across the country ahead of the presidential and parliamentary elections scheduled for December 7, 2020.

The flashpoints are located in 42 metropolitan, municipal and district assemblies, as contained in a memo dated August 20, and addressed to the Executive Secretary of the National Commission on Small Arms and Light Weapons.

Two of the country’s largest regions in terms of population size- Ashanti and Greater Accra- top the chart with 42 and 34 areas, respectively marked as hotspots.

The Eastern Region followed closely with 33 flashpoints while one of the newly created regions, Oti, has eight [8], the least number of areas marked for potential clashes as the nation prepares for the polls which are a little over two months.

Griezmann has 4 goals in his last 6 games for Barcelona
Braithwaite has scored 4 (3+1) points in Barca's last 2 games. He had not scored in 13 games before
Sami Khedira: If I could move to a Premier League club, I would be happy
Lokomotiv-Salzburg match in the Champions League will be served by the Turkish team of referees
Philippe Coutinho: I am forever grateful for the chance to play for Liverpool in the Premier League. Now focused on Barca
Mijatovic on Real Madrid's loss: Zidane must improve. The team didn't know Alaves' strengths
Frank Lampard: I Respect Mourinho. There will be no results like his if you are not a talented coach
Source https://www.ghanaweb.com/GhanaHomePage/NewsArchive/Over-600-flashpoints-identified-ahead-of-December-polls-1091896

‘We could have helped Maradona’, says Klopp |

Womanizing only brings you losses. Invest in getting a good wife — Media Personality Osas

Heavenly Father, the battle is still yours - First Lady as she prays for Akufo-Addo

More than 150 Ghanaians migrants back from Libya

CSOs call for transition from fossil fuels to clean energy

“PCs are not responsible for developmental projects” – NCCE

‘All The Nigerian Albums Released This Year Are Solid’, Says VJ Adams

Increased awareness on AfCFTA will yield maximum benefits for Ghana-Minister

This is how John Mahama celebrated his 62nd birthday

John Boyega: Silence is too expensive

Lordina's 'perfect' gift to Mahama on his 62nd birthday

‘What It Means To Be A Boss Lady’

Over 150 Rastafarians root for NPP

How I escaped death during robbery attack – Funke Akindele reveals

‘Saved by the Bell’ producers apologise to Selena Gomez

Most Rev. Atuahene Advocates For Peace Ahead Of Voting Day

Nigeria’s Economy May Emerge From Recession In 2021 Q1, Says Emefiele

Chrissy Teigen is beginning to heal after her ‘brutal’ few months

Presidency not for corrupt serpents, step down - Dr. Apaak to Akufo-Addo

I have never said monkey work or baboon chop anywhere, but ever – Mike Oquaye Jnr

Your ineptitude has vindicated the NDC - Mahama to Nana Addo

Your ineptitude has vindicated the NDC - Mahama to Akufo-Addo