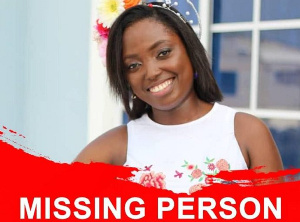 • Police have been investigating the case

• Dr. Wilberforce Aggrey, her husband, has been referred for psychiatric examination

The Ghana Police Service has stated that it has no evidence to point to the fact that Dr. Wilberforce Aggrey, the husband of the missing Lands Commission woman, is linked to her disappearance.

There have been widespread rumours that it had been established that the husband of Rhodaline Amoah-Darko killed his wife but the police, in a statement, have set the records straight, indicating that there is no such truth.

“It must be placed on record, that as of today, Wednesday, October 27, 2021, the Police have no evidence linking Dr. Aggrey to the disappearance of Rhodaline.

“Investigations are still ongoing and at this point, we are unable to disclose any information to the public on the matter,” the statement, signed by Director of Public Affairs, Superintendent Alexander Kwaku Obeng, said in part.

The police also indicated that they had secured a court order to have Dr. Aggrey undergo psychiatric examination.

“As part of investigations into the disappearance of Rhodaline Amoah-Darko, a staff of the Lands Commission in the Ashanti Region, the Police on Tuesday, October 26, 2021, secured a court order to refer the husband of Rhodaline, Dr. Wilberforce Aggrey, for psychiatric examination due to some incoherent statements from him on the matter,” the statement said.

The police is therefore urging the general public to desist from “the practice since their actions impede Police investigations.”

The public has also been urged to respect the privacy of the families involved and allow the police to do their work.

2022 budget rejection: NDC’s action may backfire against them in 2024 elections - ACEPA

2022 budget rejection may cause a delay in salary payments, other government spending – Dr Peprah

NPP has lost touch with the people of Ghana – NDC MP

2022 budget: You are tagged 'enemy' if you oppose anything about Akufo-Addo's govt – Ricketts Hagan

No budget, no pay for government workers with dire consequences for economy

Why Ghana is struggling with increased power rationing - Duffuor reveals

Be careful with anti-LGBTQI+ bill – CHRAJ

2022 Budget rejection: Speaker could face ten-year jail term if he acted contrary to the constitution

E-levy problematic, Ghana can generate US$4.3 billion from oil and mining sector – Duffuor

Explainer: Here's what the rejection of 2022 budget and economic policy means for Ghana

2022 Budget rejection – Who said what

Except when there's an emergency, police mgt must stay in traffic - IGP Dampare

This is what the rejection of the 2022 budget means for Ghana, govt

This is what the rejection of the 2022 budget means for Ghana, government

Watch all the goals John Mensah scored for Ghana

Today in History: Adopt electronic payment as a way of life – Dr Bawumia

Today in History: Six out of 10 believe Ghana is headed in the wrong direction - Report

Today in History: Akufo-Addo knows Ofori Atta, Gabby are stealing for him – Mahama

Government is suffocating over payment of trainee allowances – AFFED

Your actions not helping Parliamentary work – Lawyer to Majority leader

New GIPC Board sworn into office