Police to mark all polling stations in Accra as flashpoints 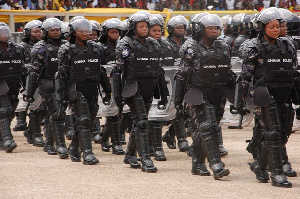 The Ghana Police Service says it is considering every polling station in the Greater Accra Region a potential flashpoint.

The service has thus called on the general public for maximum cooperation with security arrangements on Election Day by desisting from any act that would contravene the electoral laws.

It has vowed to deal ruthlessly with individuals or groups of people who would fail to observe security arrangements by the security agencies.

The Public Relation Officer (PRO) for Greater Accra Regional Command of the Service, DSP Afia Tenge in an interview on Onua FM’s Yen Sempa morning show on Friday, November 27 said the security agencies are poised to safeguard the December 7 polls.

She thus urged the public to comport themselves and adhere to all electoral laws before, during, and after the elections to avoid the wrath of the police and other security agencies.

She reiterated that the Service considers every polling center in the Greater Accra Region as a flashpoint and would do everything possible to provide full security on December 7 at all polling centers in the Region.

She told the host, Nana Okyere Awurukuo, that the police will not give room for violence or entertain recalcitrants on Election Day and would want everyone to be circumspect and law-abiding in exercising their civil right.

DSP Afia Tenge cautioned that the Police won’t give room to any violence during the elections and will not tolerate party sympathizers to come to the polling centers with party colours as well as allowing anyone to illegally campaign or influence people to vote for a particular party.

She reiterated that the police will dress in their normal uniform with their name tags and revealed that the security personnel is well-trained to ensure everyone exercises his or her franchise without being intimidated.

She thus revealed that the Service has all measures in place to protect people and properties before, during, and after the election and entreated the general public to be law-abiding in making the election peaceful and violence-free.

Ramos is the most productive defender in the period from 2011 to 2020. He has 89 goals (IFFHS)
Frank Lampard: Chelsea have lost some ground. Our character remained the same, he won us matches
Ko view in the Frame: 2 employees of the club fell ill. Medical examination of El Shaarawy postponed
Klopp on Salah's future: I don't think it will ruin the season. Normal thing for the world of football
Solskjaer on van de Beek: I would Not say that he is happy. In his position, there are players who are really good
Lester is Interested in Edouard. Rogers worked with the forward seltice
The minges can come in the start of Barca vs Elche. Desta has a muscle injury
Source https://www.ghanaweb.com/GhanaHomePage/NewsArchive/Police-to-mark-all-polling-stations-in-Accra-as-flashpoints-1120751

85 people arrested for not wearing nose masks in Koforidua

‘You Will Reap The Fruit Of Your Labor’, Actress Adunni Ade Prays For Parents

Bobrisky Vows To Spend “N532Million” On His 30th Birthday

Patapaa’s wife reveals why she agreed to marry him [Video]

Mbappe admits mind not made up on PSG future

Top 5 Places To Visit In Lagos

Made in Ghana bread selling in US stores

Places in Western Region you should consider visiting in 2021

VIDEO: Cecelia Marfo Has A Mental Disorder And Is Depressed In Her Marriage!