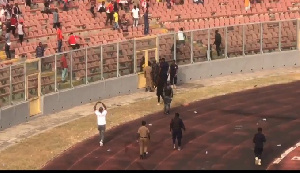 The policeman who shot and injured a Kumasi Asante Kotoko fan after last Sunday's match at the Baba Yara Sports Stadium has been interdicted by the Ashanti Regional Police Command as part of investigations into the incident.

The football fan was shot under the left eye with a rubber bullet after fans of Kotoko went on a rampage as part of a protest against referees who officiated the match on Sunday.

The Ashanti Regional Police Command has not put out the name of the policeman but has explained that investigations have been instituted into the incident, to unravel what led to the fan being shot under the left eye.

He reiterated the command's position on the need for its personnel to exhibit professionalism and ensure the safety of all persons at public events, especially at the stadia.

According to him, the incident happened at a time some supporters of Kotoko went on a rampage after the club lost a home match to Berekum Chelsea.

The fans reportedly pelted policemen on duty with stones and damaged police vehicles and also injured some policemen, he said.

ASP Ahianyo explained that the injured fan who had been sent to the Komfo Anokye Teaching Hospital (KATH) is, however, responding to treatment and is in stable condition.

Everything we know about the deadly coronavirus

Sarkodie Is My Celebrity Crush

Akuapem Curses TV3, Says They Will See No Happiness On Earth For Sabotaging Her » ™

Bobrisky set to start her own reality show

I’m not being allowed to buy forms – Addai-Nimo laments

I Killed My Brother To Inherit His IPhone 11 – Suspect

2020 polls will be serious – Rawlings

“No roads no vote” and similar mantras unfortunate – CHRAJ

3 Nigerian stowaways land in Ghana instead of Spain

National Cathedral Project Will See The Light, With Or Without Gov't Support

Five boxing personalities who have been banned by the GBA

Nine girls rescued from being trafficked at Lagos airport

2020 is the year of the customer - Surfline Communications

I Will Deal With Oshiomhole If He Tries Nonsense: Obaseki