Political science research was compromised, we disregard it – TEIN-UG 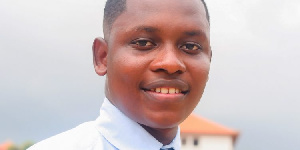 The students’ wing of the National Democratic Congress in the University of Ghana has described the latest research findings by the Political Science Department of the same institution as fabricated and not factual.

The survey, which has received opposing reactions from politicians and several Ghanaians, stated that President Nana Addo Dankwa Akufo-Addo, flagbearer of the New Patriotic Party (NPP) will retain his seat as president by winning 51.7% while flagbearer of the National Democratic Congress (NDC) John Dramani Mahama will garner 40.4%.

“Following the release of the report, there have been issues about some persons having gone to pay monies to compromise the authenticity of the research,” he alleged.

Speaking to UniversNews, Mr. Tamakloe added that “even looking at the political atmosphere, if you look at what Akufo-Addo has done in the past four years you can tell obviously that the will of the people have not reflected in the research conducted by the department. For me, I do not take into any regard, what the political science department has released”.

Meanwhile, the President of the UG chapter of Tertiary Education Students Confederacy (TESCON-UG), Martin Abdallah expressed satisfaction with the process.

“We welcome this report and in fact, it is a positive report for us but that wouldn’t make us complacent. With the days left for the election we are going to work ourselves out to ensure that we send our message to the people”, he said.

Mr. Abdallah was confident that the party will garner “more than 51.7% as opposed to what the political science department has predicted”.

The survey was conducted in 100 constituencies in all 16 regions of the country with about 12,000 respondents. It predicted a win for Akufo-Addo by 51.7% votes with John Mahama falling behind with 40.4% of votes.

The survey also indicated that the Ghana Union Movement (GUM) was the next option for voters and predicted it will garner 1.3% of votes.

According to the survey, 3.7% of voters had still not decided whom to vote for.

Arsenal approached Real Madrid regarding the lease of Edegra
Inter can sign Gomez only in the case of the sale of Eriksen. The Argentine likes Conte
Real Madrid, AC Milan and Man City are Interested in Feyenoord defender Senesi. He is estimated at 35 million euros
The election of the President of Barcelona will be held on March 7
Tiago Silva on Chelsea: No one said it would be easy. We are not going to give up
PSG are Interested in Eric Garcia. City defender wants to move to Barca (Mundo Deportivo)
Gasperini about the Beginning of: He has good technique, but Atalanta needs sharpness in attack. I am sure he will give it to us
Source https://www.ghanaweb.com/GhanaHomePage/politics/Political-science-research-was-compromised-we-disregard-it-TEIN-UG-1120856

Procure more PPE to aid our work - GRNMA to government