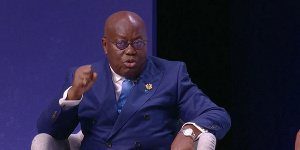 According to the President, the subject of free tertiary education has been discussed at top levels because it is seen as a natural consequence of broadening the base for SHS.

Mame Yaa Aboagye, contributing to the President’s laudable plans, applauded him and described his statement as a “positive step in the right direction”.

According to her, President Akufo-Addo and the NPP government have placed importance on the welfare of children and their right to education in the country, therefore such a move deserved commendation.

Mame Yaa urged Ghanaians to repose confidence in Nana Akufo-Addo’s vision “because he has done some before and can also do this as promised”.

She also asked the NDC to applaud the President instead of trying to shed a negative light on his efforts to transform Ghana’s educational system and the free tertiary education policy.

“Give Akufo-Addo some credit for such an innovation plan before turning around and claim ownership of the idea someday,” she said.

Hearts of Oak to get modern commercial centre

'I know you will succeed' - Wakaso after Akonnor’s sack

IT specialist suggests use of smart technologies to prevent illegal-mining

GFA, Sports Ministry to discuss salary with Rajevac before agreement

ECOWAS needs deep introspection if it wants to curb coups

'Do or die' vs 'all die be die': Mahama giving the same excuses Akufo-Addo gave

Former Kotoko goalkeeper Felix Annan could be heading to Medeama

Like incompetent Akonnor, Akufo-Addo and NPP will be sacked in 2024

Like incompetent Akonnor, Akufo-Addo and NPP will be sacked in 2024 - NDC man

Nautyca teams up with Shatta Michy on new single, ‘OK’

WAEC yet to set date for leaked WASSCE papers

You’re our ‘spiritual father’ but the laws must work

NDC flagbearership is not a personal property

NDC flagbearership is not a personal property - Yaw Boateng Gyan

Harruna Attah celebrates 69th birthday with 'do or die' T-shirt

Teenage pregnancy, cause of unemployment

Should Someone Who Has Worked His Whole Life As An Actor Be Feeding Off Donations ? Fix The System

Teenage pregnancy, cause of unemployment-NPC

Labourer remanded into custody for robbery

Tailor gets 10 years imprisonment over fraud