President Akufo-Addo to use second term to industrialise Ghana 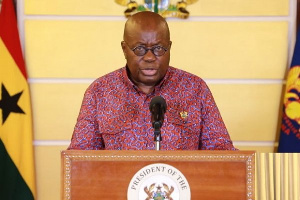 Nana Addo Dankwa Akufo-Addo, President of Ghana has said, if Ghanaians give him a second term, he would use it to build on the foundation he built during his first term to industrialize the country.

He said he had been faithful to Ghanaians and urged the electorate to re-elect him based on his achievements.

President Akufo-Addo was speaking in an interview on a local radio station in Koforidua and monitored by the Ghana News Agency (GNA) explained that illegal mining, the plastic waste menace and land guards were not easy issues to be resolved, but what was important was to create conditions for their gradual eradication.

He said the government had already introduced the community mining system which had a lot of the illegal miners.

The President said, the government had also initiated alternative livelihood programmes in the mining communities and it was expected that as the economies of those communities improved, many of the people in the illegal mining would be attracted to join other sectors of the economy.

The President gave the assurance that the affordable housing project started in Koforidua during the era of President Kufuor and the Kwahu East District Hospital started by the government of President Mahama would be completed.

He assured that all those who invested in the collapsed financial institutions would be paid by the end of August this year and said already 98 per cent of those people were paid out of the GH¢21 billion provided by the government.

Rostov will reject the offer of Genoa for Shomurodov, as they want more than 8 million euros (SE)
Mendes earned about 20 million euros during the summer transfer window
Carragher on Arsenal: Liverpool are a few years ahead, but Arteta can take them to the Champions League
Roma is the favorite in the fight for Jovic. Real Madrid have offers from Inter and Milan
Ruben Dias has arrived in Manchester to complete his move to city
Van Dijk's transfers are the key to Liverpool's victory. They killed any attempts of Arsenal to press
Tony Adams: Leno is not a top-4 goalie. For me, Martinez was number one
Source https://www.ghanaweb.com/GhanaHomePage/NewsArchive/President-Akufo-Addo-to-use-second-term-to-industrialise-Ghana-1025338

Kwame Baah set to remain Asante Kotoko No.1 for next season

'We have the ability to fix voter roll anomalies' – Jean Mensa

#BBNaija: I will beat up Nengi – Actress Nkechi Blessing sends a threat to the camp of Nengi and her management team

EC urges youth to be instruments of peace, not objects of war

I don't wish 'juju' on my teammates - Adam Kwarasey

As Christians, do not dress fashionably because it influences others to sin-Ps Adeboye’s son

The National Theatre silenced by coronavirus

Traumatised Lee Addy feared for his life during lockdown in Ethiopia

“Now that BBN is over, hope you all remember that Buhari is still our President” – Peter Okoye reminds Nigerians of hardship

I was betrayed- Kumawood actor who was reported dead speaks

Public urged not to relent on coronavirus safety protocols