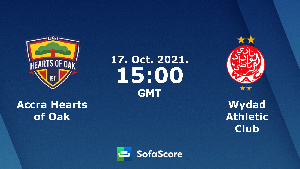 The Phobians host the 2017 Champions League winners in the first of a two-leg encounter and are very confident of going into the second leg with a victory.

Wydad have been badly hit by the Coronavirus as their head coach Walid Regragui and other members of the team tested positive for the virus making it impossible for the team to host their training session on Saturday.

The Moroccan champions will also be without some of their key players who have been instrumental in their campaign this season.

Wydad are unbeaten this season having won four out of their last five outings with just one game ending in a stalemate. The club is second currently in the Moroccan Professional League.

Hearts of Oak on the other hand have not had a good test of active football due to the absence of the Ghana Premier League which is yet to kick off.

The Phobians managed to defeat Guinean side CI Kamsar by 2-0 to progress to the current stage of the competition.

With Coach Samuel Boadu at the helm, Hearts of Oak are confident of beating the Moroccan side who have never tasted a victory in Ghana before.

Speaking in a recent interview, midfielder, Emmanuel Nettey said, “We are going out there all guns blazing. We know we have been out of the competition for a very long time. We are back and we want to prove a point not just to WAC but to the whole of Africa that we did not make the progression by fluke.”

According to striker Afriyie Barnieh, “we are confident because they’ve never won a game in Ghana so we are also going to continue to make sure they don’t get any point in Ghana.

EPI explains how enforcement on no vaccination, no access to restaurants, others will work