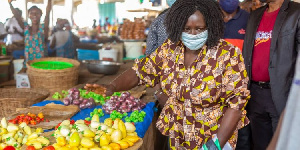 The Vice-Presidential Candidate of the National Democratic Congress (NDC), Professor Naana Jane Opoku-Agyemang, has ended her five-day tour of the Western Region.

She ended the tour with an assurance to the people of the region that the NDC offers the best choice for quality and trusted governance that will lead to sustainable development for all Ghanaians.

The visit, her first to the region since she was out-doored as running mate to former President John Dramani Mahama, enabled Prof. Opoku-Agyemang to introduce herself to the chiefs and people and to solicit their support for the NDC in the upcoming general elections.

During the tour, Prof. Opoku-Agyemang paid courtesy calls on various traditional leaders, interacted with a number of stakeholders including traders, artisans, small scale miners, farmers, students, fishermen and professional groups, among others.

The Running Mate, who arrived in the region on Sunday to a rousing welcome expressed appreciation to the chiefs and people for their warm reception.

She gave the assurance that all infrastructure projects which were started by the previous NDC administration, but were abandoned by the present government, would be completed when the NDC is voted into power.

She explained the provisions in the NDC manifesto for national progress, and indicated that the socio-economic needs of the region have been adequately catered for in the manifesto.

Touching on education, she pledged that the next NDC government will ensure increased access to quality learning, introduce more incentive packages for teachers, and restore discipline in schools.

Ronaldo re-tested positive for the coronavirus. He probably won't play against Barca (Correio da Manha)
Simeone's most crushing defeat at Atletico: lack of Parti, clever adaptation of the flick and grandiose Coman
Barca players are unhappy that some players have extended their contracts with reduced wages (Marca)
Capello on the debut of the Beginning: Fantastic goal. I spoke with Gasperini, he is happy
A Spanish journalist compared Fati to a black salesman running away from the police. Barcelona sues (despite the apology)
We play with major soccer bandits, and I get a yellow for it? Mueller - referee of the match with Atletico
Samuel eto'o: Guardiola is great. He didn't go out just for Messi
Source https://www.ghanaweb.com/GhanaHomePage/NewsArchive/Prof-Opoku-Agyemang-ends-tour-of-Western-Region-1063075

‘Our Ultimate Goal Is Not To Destroy Our Country’

Checkout state of Akyem Batabi Church building before it collapsed

Herdsman Who Butchered Woman To Death At Mafi Caged

Could This Beautiful Woman Be Wayoosi’s Wife? See Her Alluring Photos After They Were Spotted Together » ™

Buhari cares about no one except himself, Life does not matter to a clueless leader – Ayodele Fayose blows hot

NDC, NPP supporters to engage in Football match on October 31

My magical power is a gift from God – 82-year-old Prof. Hindu claims

Ghana will suffer if violence in Nigeria escalates – Kwabena Donkor

Ghana drops in FIFA Ranking for the Month of October

Magician recounts how he killed and resurrected over 1 million people

NPP has fulfilled most of its manifesto promises, Ghanaians can see them – Kajaji Chief

“My Soft Bortors Is Not Free, You Must Pay To Chop” – Hajia Bintu Tells GH Guys » ™

LekkiMassacre: “You Are A Failure” – Wizkid Tells Buhari, Osinbajo, IGP To Resign

Pay attention to our roads now - Weta chiefs to Akufo-Addo

I know I don’t respect – A Plus admits