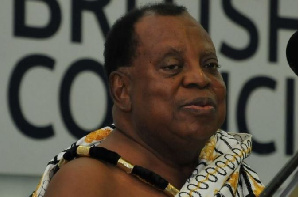 Professor SKB Asante has passed on

A statement sighted by the GhanaWeb has the Board of Trustees of the Centre for Regional Integration in Africa where he served as Executive Director, announcing his demise.

“It is with profound sorrow that the Centre for Regional Integration in Africa (CRIA) Board of Trustees and Secretariat announce the loss of the beloved Founder of the Centre. May PROF SKB ASANTE rest in eternal peace.”

Sources at the National House of Chiefs also confirmed the unfortunate event.

Professor SKB Asante, till his demise, was a member of the National Peace Council and a recipient of the Order of the Volta Award.

He is a product of the Achimota School and a former head of the Political Science Department of the University of Ghana.

He is credited with being one of the persons that helped framed the 1992 constitution.

Read his full details below

Professor S.K.B. Asante, a product of Abuakwa State College, Achimota School, University of Ghana, and London School of Economics and Political Science, University of London, is the Executive Director of both the Centre for Regional Integration in Africa (CRIA) and the S. K. B. Asante International Consultancy Services (SAICs); Chairman of the Board of Trustees of the Professor and Mrs. S. K. B. Asante Educational Trust Fund; Member of the Governing Council of the Institute of Fiscal Studies; Professor of the Legon Centre for International Affairs and Diplomacy (LECIAD), and a Fellow of Ghana Academy of Arts and Sciences.

Professor Asante has been working in the field of regional integration for more than three decades and was selected by the United Nations African Institute for Economic Planning and Development (IDEP) for its very first Documentary Series (2015) on the Makers and Shakers of African Development, highlighting his distinguished contribution towards “Achieving Integration in West Africa”. Professor Asante was awarded the ORDER OF THE VOLTA (2008), a Ghana National Award, for distinguishing himself in Public Service, and the Ghana Book Award for Distinguished Writers (1980).

Professor Asante has published prolifically, especially on regional integration, governance and African development and serves as consultant to a number of international organizations, including the United Nations, World Bank, African Development Bank, European Union, ECOWAS and the African Leadership Forum.

Ole Gunnar Solskjaer: the Movement of Cavani is impressive, everyone should learn. This is the striker Manchester United were looking for
Lazio wants to rent Rugani from Juventus. Defender plays for Rennes since October
Barcelona wants to give Umtiti on loan
Bernardo Silva: Man City have been playing well lately. We are good in all the lines
Real Madrid players were surprised by Zidane's soft speech at the first training session after the relegation from the Cup
Leicester have joined the fight for Eriksen
Real Madrid can invite Gallardo from River Plate instead of Zidane (ESPN Argentina)
Source https://www.ghanaweb.com/GhanaHomePage/NewsArchive/Professor-SKB-Asante-dead-1120679

136 people in Sweden have suspected side effects after vaccination

ICT education to be made compulsory in all schools – Inspectorate Authority

We look back almost a year after first infection

Actor Junior Pope Spoils His Wife With Money, Dinner Date On Her Birthday

‘America just got a brand-new dad’

Residents of Esereso Adagya appeal for completion of classroom block

”If You Meet A Woman That Really Likes You, You’ll Realize Women Are Not Broke Or Stingy” –Lady Says

I need a man in my life – Tima Kumkum

GFA to close down centers that violate COVID 19 protocols

JHS leaver makes a paddle car out of wood

EC to elect Council of State regional representatives on February 12

‘America Is An Experiment, Not A Perfect Union’

Election victory events may have contributed to coronavirus spike – Nana B

Akufo-Addo cuts down his elephant-sized government to 85

Lady kidnaps ex-lover for refusing to marry her

‘I’m Going Into Music This Year’